An Atlanta-area mom was arrested Tuesday after she called for “death to all white cops nationwide” on her Facebook page, police said.

Ebony Dickens, of East Point, was booked on terror-related charges a day after she posted a paragraph-long rang against white police officers on Facebook, investigators said.

“All Black ppl should rise up and shoot at every white cop in the nation starting NOW,” she allegedly wrote on her Facebook page under the name Tiffany Milan, according to WTVM. “I condone black on white killings. Hell they condone crimes against us.”

The non-deleted rant continued: “I've thought about shooting every white cop I see in the head until I'm either caught by the police or killed by them.”

The 33-year-old said she was plotting an attack and “might kill at least fifteen tomorrow.”

“That’s 15 people that she’s talking about killing within a day or so, so whether she is serious or not that's something that we have to take seriously,” East Point Lt. Cliff Chandler said. 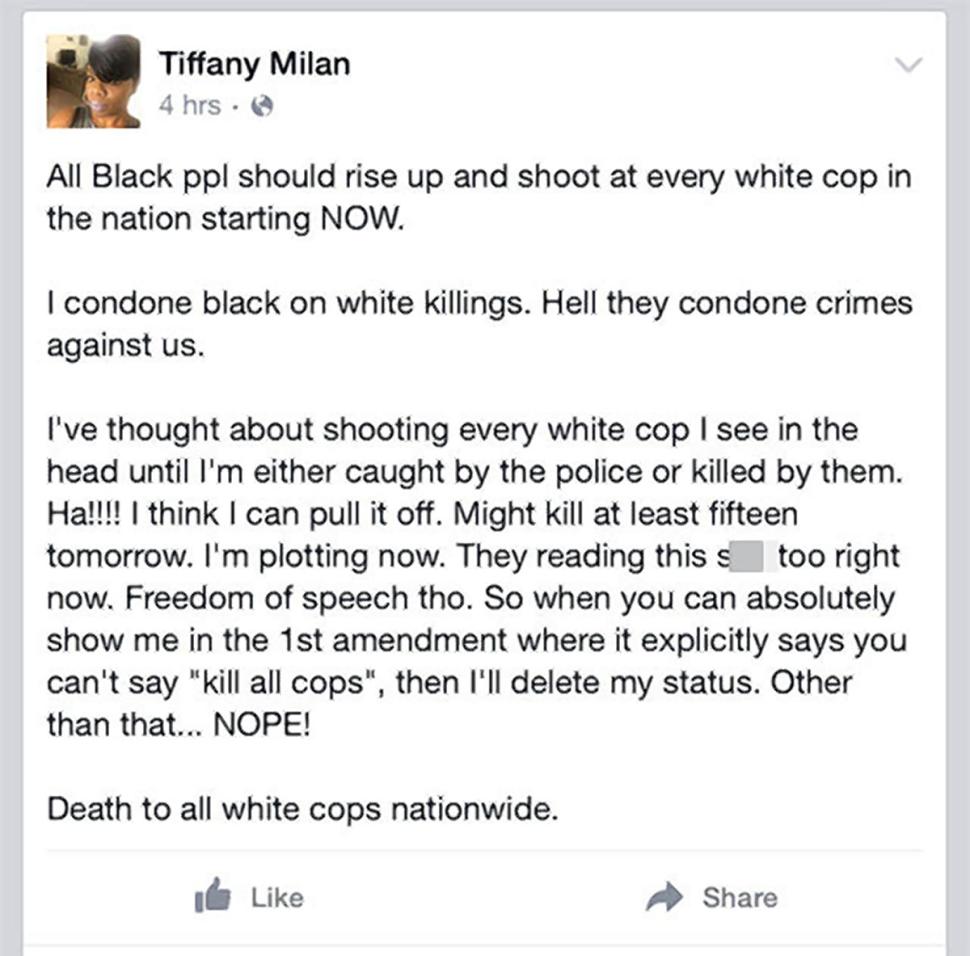 The post came as racial tension boiled over in Baltimore, where protests turned Monday violent. The ongoing riots are fueled by the death of Freddie Gray, a black man who died a week after suffering a spinal injury while in police custody.

Atlanta Police caught wind of the Facebook threat and tipped off East Point police once they tracked it to Dickens. East Point is about six miles southwest of Atlanta.

Dickens deleted her Facebook account hours before her arrest, carried out by East Point with help from the FBI, the Department of Homeland Security and the New York Police Department, according to WSB-TV.

She has been charged with disseminating information related to terrorist acts, but she could face more charges as officials investigate. We live in a world where freedom of speech doesn't really exist. You're free to say wtf you want …… But held accountable for what you say & in this case, what you type …….