Eminem Debuts His Duet With Rihanna 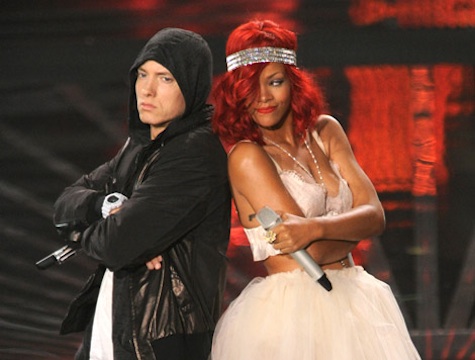 Eminem debuted his latest collaboration with Rihanna on his Sirius Satellite Radio station Monday. The track, “The Monster,” is the fourth selection to be heard from Eminem’s upcoming “The Marshall Mathers LP 2,” set for release Nov. 5. On it, Eminem talks about his struggles with fame and his desire to be “the Bruce Lee of loose leaf,” and he briefly yodels at one point. The song, which goes on sale at midnight Tuesday on iTunes, marks the third time Eminem and Rihanna have collaborated. “The Monster” follows previous “Marshall Mathers LP 2” offerings “Berzerk,” “Survival” and “Rap God.” “Rap God” debuted at No. 1 on last week’s Nielsen SoundScan Digital Songs chart, after selling 270,000 downloads its first week. Eminem’s promotional blitz kicks into overdrive this week, as he’s set to appear on “Saturday Night Live” on Saturday, and he’ll also perform YouTube’s first-ever music awards show Sunday. He’s participating in a question and answer session with fans at SiriusXM on Nov. 4, which will be aired on his Shade 45 station at noon Nov. 5.