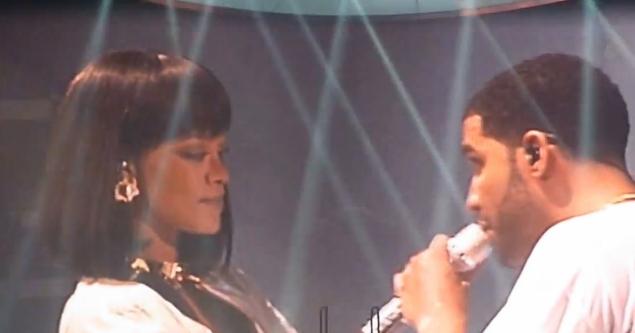 Rihanna and Drake's latest public appearance isn't going to quell rumors that the two are dating.
The "Diamonds" singer joined the rapper onstage during a Paris concert stop for his Would You Like A Tour? Tuesday night, with the two performing "Take Care," a track they collaborated on for Drake's 2011 album of the same name.

The duo, with both dressed in white, drew wild cheers from the crowd throughout their performance. Rihanna and Drake were noticeably affectionate with each other and, at one point, Drizzy even nuzzled her cheek. The two also showed off their sizzling chemistry when they danced together, with the pop star even briefly grinding on the rapper.

Rihanna's surprise appearance at Drake's show is just the latest sign the two have been spending time in each other's company. The stars were seen at a Paris nightclub on Monday and a Los Angeles nightclub earlier this month.