DAMN! WOMAN GETS HER ARM SNAPPED! An all-women charity arm wrestling tournament at a Delaware pub took a sour turn after one woman snapped a competitor’s arm during a bout.

At first, Megan Weber, 31, of Lewes, dusted her opponent, who grappled under the name “Sweet Treats,” when the two faced off at the Delaware Arm Wrestling Lady League event in Rehoboth Beach earlier this month.

But when the two hooked up again, this time using their left hands, Sweet Treats – who wore costume ice cream cones in her hair – served Weber a broken funny bone.

The News Journal said she broke her left humerus, the bone that runs from shoulder to the elbow.

“Stuff like that, you never expect things like that to happen,” Weber, who wrestled under the name Rogue Scout, told the newspaper.

“I was looking forward to a fun thing to do for a good cause,” she said. “It’s nobody’s fault. It’s just a freak thing that happened.”

Despite Weber’s injury, the event was a success, raising more than $1,000 for breast cancer research, the newspaper reported.

Weber said she’d continue to support the league, which raises money for women’s issues, but would watch from ringside next time.

“I think one time was enough for me,” she said. 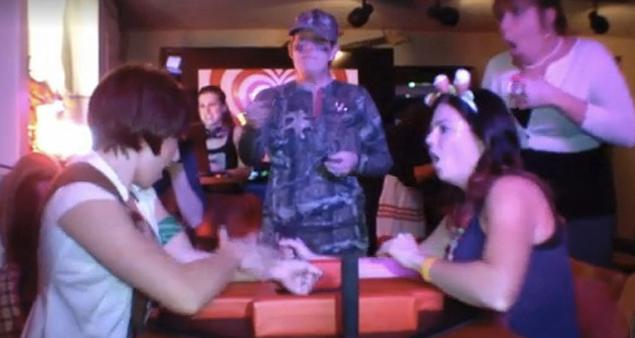