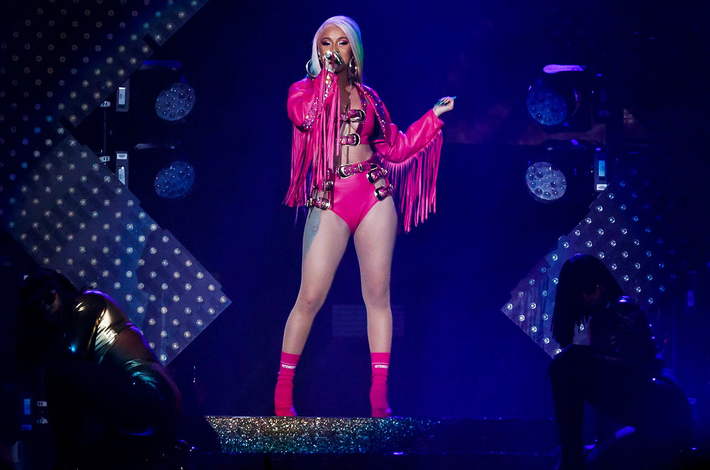 Cardi B has made it very clear that she won't be joining Maroon 5 during the Super Bowl LIII Halftime Show, but those who attended the Bud Light Super Bowl Music Fest on Saturday night (Feb. 2) still got to see her perform her part in "Girls Like You."

The "Money" rapper delivered her verse in the Billboard Hot 100-topping hit during her 45-minute set, even giving Maroon 5 a quick shout-out.

"Who's excited for Maroon 5 to perform at the halftime show tomorrow?" Cardi asked the crowd before diving into her "Girls Like You" part. "I was really excited when they called me to do this song."

Though she didn't address the speculation that she may show up during Maroon 5's halftime show performance, Cardi has shut down any hopes that she'll make a cameo earlier Super Bowl weekend. She told the Associated Press she turned down an offer from the NFL to appear on the halftime show with "mixed feelings," but felt obligated to stand behind Colin Kaepernick because he stood up for minorities. And in an interview with Entertainment Tonight, she further declared that she will not be appearing in the halftime show: "Certain things, I just can't push my limits," she said, adding, "my soul wouldn't feel right." Cardi's decision to forgo the halftime show is nothing against Maroon 5 or the song, though, as she also told ET that the track means a lot to her particularly because she's a mother. "When I was pregnant, and me having a girl inside of me, hearing the song, I teared up a couple of times," she admitted.

Cardi also busted out several other features during her Super Bowl Music Fest set, including G-Eazy's "No Limit (Remix)" and Kehlani's "Ring." One feature she didn't perform was Bruno Mars' "Finesse," and she didn't return to the stage when Mars performed the song during his set later that night. But that took no shine away from Cardi's brilliant performance, which was full of female empowerment as she strut across the stage assisted by a group of female dancers.