A Brooklyn basketball court and playground got a B.I.G. overhaul Wednesday.

And it fulfills a promise the city lawmaker made to Voletta Wallace, the slain hip hop star's mother, that he would honor her son.

"The feeling is surreal," Cornegy said during the ribbon cutting on Fulton St. and Classon Ave. in Bedford-Stuyvesant.

The courts are part of a $2.5 million playground renovation that took the Parks Department five years to complete, according to its records. It includes improved handball courts, new playground equipment and a redone safety surface. The park area around the playground also got new stairs and new landscaping all around it.

The rapper, whose real name was Christopher Wallace, frequented the basketball court before he became famous with hit songs "Juicy," "Big Poppa" and "What's Beef."

Cornegy has been trying to honor the rapper for years. His proposal in 2013 to rename a section of St. James Place was nixed by opponents who cited Biggie's violent lyrics and drug-dealing history.

On Wednesday, Cornegy stressed that the rapper's mother has changed her son's legacy by creating the Christopher Wallace Memorial Foundation.

"(His mother) changed the acronym for B.I.G. to stand for books instead of guns," Cornegy said. "We're in the process of redoing libraries providing books for young kids in school and that was her commitment."

Biggie was murdered in a drive-by shooting in Los Angeles March 9, 1997, hours after the Soul Train Music Awards. No one has ever been charged in the killing.

Some of Biggie's old friends found it all hard to believe. 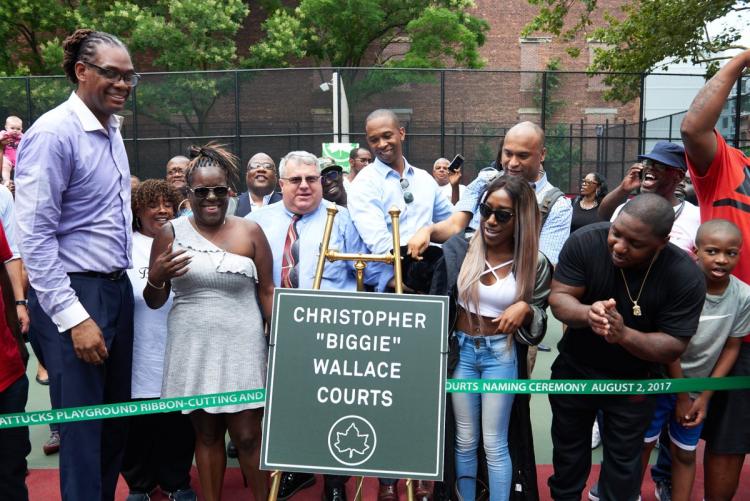 "If you were to tell Biggie that he was getting basketball courts named after him he would have laughed," said Mr. C from Junior Mafia. "He was just a funny dude, always laughing."

The rapper's daughter was overjoyed.

The playground itself is named for Crispus Attucks, a black man who was killed in the Boston Massacre and considered the first casualty of the American Revolution.