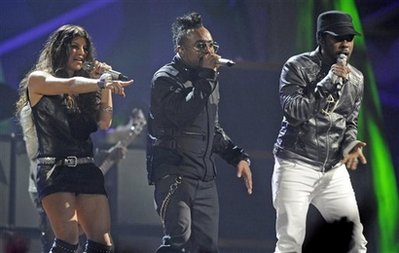 NEW YORK – U2 brought three generations of chart-toppers — Mick Jagger, Bruce Springsteen and the Black Eyed Peas — with them onstage Friday at another night of mix-and-match magic at Madison Square Garden.
Metallica brought the thunder to Lou Reed and Ray Davies. It was the second of two concerts to celebrate the 25th anniversary of the Rock and Roll Hall of Fame, and they will be edited into an HBO special to be seen on Thanksgiving weekend.

During U2's set, Bono was waxing poetic about the spiritual, physical and political power of rock 'n' roll until finally the Boss had had enough.

"Let's have some fun with it," Springsteen said. They performed U2's "I Still Haven't Found What I'm Looking For," with Bono and Springsteen trading call-and-response vocals during the final verse.

U2 topped the bill for the four hours of music. True to the spirit of Rock Hall events, producers sought some unusual pairings for artists to pay tribute to influences: Annie Lennox and Lenny Kravitz joined Aretha Franklin onstage, and Sting popped up to sing "People Get Ready" with Jeff Beck.

Jagger, who sang "Stuck in a Moment You Can't Get Out Of" with U2, also danced a duet with the Black Eyed Peas' Fergie on "Gimme Shelter." Jagger stuck his microphone in his waistband as the black miniskirted Fergie approached. U2 stood in the background, the world's most expensive "house band," as Jagger called them.

U2 asserted authority when everyone left the stage, closing the show alone with "Beautiful Day."

Just to show music's finest aren't perfect: U2, Springsteen and Patti Smith needed a do-over when they mangled their version of "Because the Night." They almost needed a third, when Smith missed the cue to start.

Metallica went for an easy cheer from the New York crowd by playing video of the Yankees' Mariano Rivera behind them during "Enter Sandman." The song is played at Yankee Stadium when Rivera enters a game.

"We're not the most jammy kind of band," he said. "We're kind of a tight little unit. We don't let a lot of people in."

One choice was unsurprising: Ozzy Osbourne, who sang "Paranoid" and "Iron Man." The others were less obvious but went over hugely well, judging by the crowd. New York's Reed had a muscular backing for "Sweet Jane" and Davies had the type of riffing he hadn't seen since the Kinks on "You Really Got Me" and "All Day and All of the Night."

Jerry Lee Lewis began the show with his hit "Great Balls of Fire." A half-century ago, he might have ended it with some leaps or kicking of furniture; now, he slowly pushed his piano stool over at the song's end.

Franklin was a teaser, introducing one song as being "for those of you who don't feel they're getting enough respect" — then sang a show tune from "Ragtime." She introduced her band and drew a blank on the name of her guitar player. She barely acknowledged Lennox when they shared the stage for "Chain of Fools.

She still has a gale's force voice, though.

And, in the end, audience members got their "Respect."