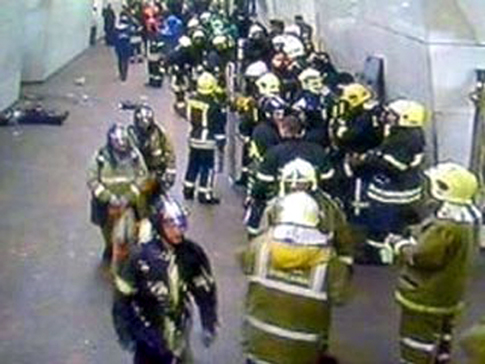 Just before 8 a.m., a bomb rocked Lubyanka station, beneath a federal intelligence office. About 40 minutes later, another blast went off at a station near Gorky Park.

Russian Prime Minister Vladimir Putin blamed Islamic separatists in the Caucasus region, where Russia fought the Chechens a decade ago.

"Terrorists will be destroyed," Putin said.

Russian television showed video of subway riders lying on the floor, the platform full of smoke.

"It was very scary," said Valentin Popov, 19. "I saw a dead body. Everyone was screaming. There was a stampede at the doors. I saw one woman holding a child and pleading with people to let her through, but it was impossible."

"The American people stand united with the people of Russia in opposition to violent extremism and heinous terrorist attacks that demonstrate such disregard for human life, and we condemn these outrageous acts," he said in a statement.