A CARFUL OF ATTACKERS PULLED UP & SHOT UP THE FOOTBALL GAME IN HONDURAS KILLING 14 PEOPLE! 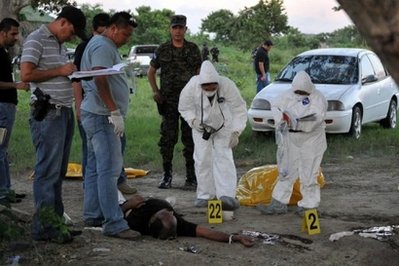 TEGUCIGALPA, Honduras - A carful of attackers armed with assault rifles drove up to a football field in a poor Honduran neighborhood Saturday and opened fire, killing at least 14 people.
Armando Calidonio, vice minister of security, said the gunmen shot from point-blank range at the victims, who were known to gather there to play football.

Ten were killed at the scene and four died as they were being taken to the hospital. More were wounded - some gravely, Calidonio said, though the number was not clear.

The attackers numbered about five, but police did not have any suspects.

"We still do not know the motive of this tragedy," Calidonio told reporters.

The massacre took place in Colonia Felipe Zelaya, a crowded, violent neighborhood in the northern city of San Pedro Sula that is home to hundreds of gang members.

Mass shootings are not uncommon in Honduras. "Maras" - street gangs that grew out of Los Angeles and spread to Central America - are blamed for rampant violent crime, extortion and more recently acting as enforcers for drug cartels.

In September, gunmen mowed down 18 shoe factory employees in San Pedro Sula in a shooting blamed on gang rivalries.

Six youths were slain in a home last month, also in San Pedro Sula. Authorities linked that massacre to the drug trade.