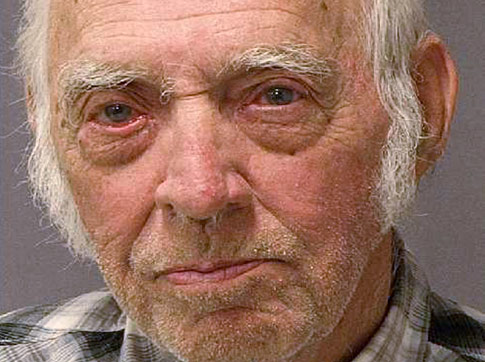 An 87-year-old Indiana farmer busted with $2.9 million worth of cocaine in the bed of his pickup truck claims his career as a drug courier was launched at gunpoint.

A boisterous Leo Sharp was released on bond at a court appearance Monday, three days after his arrest while driving on Interstate 94 near Ann Arbor, Mich., police said.

"You're dealing with a man forced to do what I did at gunpoint," Sharp told the judge before his lawyer advised the senior citizen to keep quiet.

The quirky Sharp promised to make his next court date on Nov. 10, assuring U.S. Magistrate Judge Mark Randon, "You're the boss."

Sharp also asked at one point for access to medication taken by officers: "I could have a stroke."

And he offered the judge a random apology: "I'm sorry, sir, to be so troublesome."

The volume of cocaine left Sharp facing a 10-year prison stint if convicted of conspiracy to possess with intent to distribute cocaine.

Sharp, before leaving Michigan for his farm in Michigan City, Ind., said he was planning to write a book about the case.

Randon ordered a mental health evaluation for the octogenarian defendant.