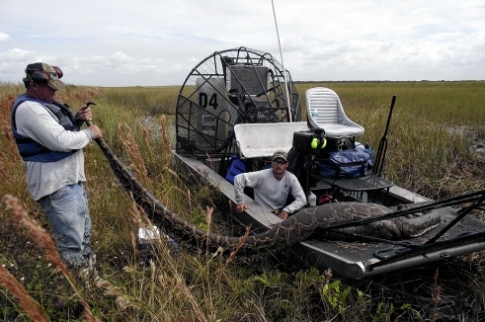 Authorities in Florida have captured and shot dead a 16-foot-long Burmese python after it swallowed an entire adult deer.

The humongous snake was discovered on Thursday by a water management company in western Miami-Dade County in the Everglades.

The slithering reptile had a giant bulge from the 76-pound female deer it had recently eaten.

Officials said it was necessary to capture the python to help stop the spread of the species further north.

The deer was found dead, but amazingly fully intact, and the python was one of the largest ever found in South Florida.

"This is clearly an extreme event," Skip Snow, a python specialist who conducted the autopsy told the South Florida Sun Sentinel. "It shows you they can eat huge things."