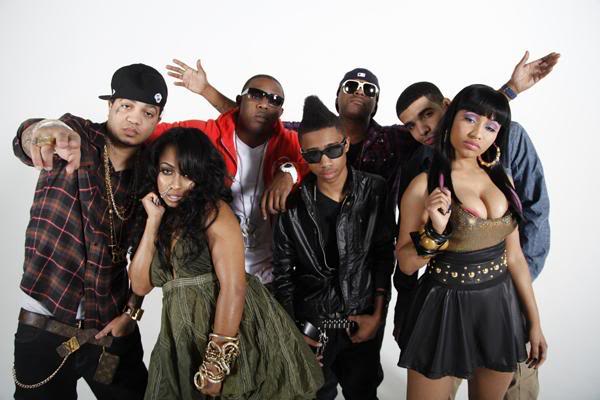 Both Young Money and Eminem made a huge impact on The Billboard 200 this week, putting hip-hop back on the top of the charts.
We Are Young Money, the debut album from Lil Wayne’s protégés, landed at the no. 9 position after its first week on shelves. The group, which consists of Drake, Nicki Minaj, Jae Millz, Gudda Gudda, Mack Maine, Tyga, Lil’ Chuckee and Lil Twist, managed to move 142,100 units, according to the Nielsen SoundScan.

With the re-release of Eminem’s highly successful Relapse album coming out last week, Shady earned a tremendous bolster on the charts. Not only did Em rise 83 spots to no. 11, but the Detroit Lyricist received a 713 percent increase in sales. While it is unknown how many copies of Relapse: Refill were sold, 127,600 copies of both discs were purchased this week. Overall Relapse has sold 1,694,500 units since entering the charts last May.

Gucci Mane just made the Top 40 this week, as his new album The State Vs. Radric Davis landed at the no. 39 spot. Despite sliding down two notches, the Atlanta rapper actually received a 2 percent bump in sales. Fans bagged up 42,200 of Guch’s CD this week, making the incarcerated MC’s three week total 173,400. —Max G