WTF! BEFORE HIS HOTEL MELTDOWN CHARLIE SHEEN WAS FOUND IN THE RESTAURANT BATHROOM NAKED WITH COKE ON HIS FACE! 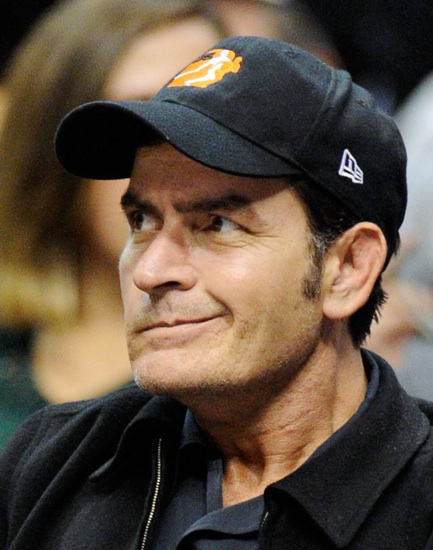 Sheen dropped his pants in the bathroom at Daniel after convincing Capri Anderson to join him. But she bolted in a dispute over a promised yet unpaid $12,000 fee for their night on the town, the website reported.

After Anderson returned to the table, Sheen's nervous assistant went to rescue the alcohol-addled actor from the bathroom - but found him nude except for the blow on his face, RadarOnline reported.

The latest damning revelations came after Sheen's spokesman declined to comment on reports that the "Platoon" star was spewing a vile stream of racial slurs as he trashed a hotel suite.

In the most detailed account of Sheen's bizarre booze-and-blow binge, RadarOnline.com reported that Sheen repeatedly screamed the N-word and punched the walls of his $1,000-a-night suite at The Plaza.

As Anderson cowered naked inside a locked bathroom, Sheen inflicted $7,000 in damage on his 18th-floor room.

Sheen, 45, who has spent 93 days in rehab this year, started his night with dinner, drinks and debauchery at the Daniel.

That's where Anderson bizarrely posed for a photo with the star's ex-wife, Denise Richards, who was in town with Sheen and their two young daughters.

After the "Major League" bad boy and Anderson, 22, returned to his suite, they smoked cocaine, RadarOnline said.

Sheen then flew into an incoherent rage when the bisexual Bronx-raised beauty refused to have sex with him until she received the $12,000, the report said.

He began tossing furniture around the suite, and by the time cops were called to the hotel, Sheen was naked and frothing, police sources said.

Cops threw a sheet on the hooker-loving star before tackling him. Sheen spent the night at a Manhattan hospital and took a Tuesday evening flight to California aboard a private jet.

Anderson has insisted she is not a prostitute, but she is moving to cash in on her notoriety.

Anderson urged visitors to her X-rated website to put their money where her body parts are, offering discount memberships.

She also hired a lawyer who contacted Sheen counsel Martin Singer about the bizarre incident, according to TMZ.com - raising the spectre of hush money.

Anderson, in her Internet posting, offered no details of her night on the town with Sheen, who is on probation for an attack on his third wife, Brooke Mueller.

"Please don't believe everything you hear in the news," she said.

Neighbors said Anderson - born Christina Walsh - had convinced her father that she was doing well as a model.

"He's probably heartbroken," one neighbor said. "It's probably destroyed him to know his daughter's doing this."

Her rattled dad, returning home Thursday from his job as a Park Ave. doorman, was angry and upset by the unwanted attention.

"I don't even know if it's her," he said. "It could be somebody else's daughter."

SMDH! CHARLIE SHEEN IS THE POSTER BOY FOR HOLLYWOOD'S DOUBLE STANDARD! HE'S THE HIGHEST PAID ACTOR ON A SITCOM RIGHT NOW! HE'S BEEN ACCUSED OF HITTING & ABUSING WOMEN SINCE 1997. WHEN HE WAS ARRESTED IN ASPEN FOR PUTTING A KNIFE TO BROOKE MEULLER'S THROAT THEY LET HIM SERVE HIS PRISON TIME AT NIGHT, WHILE DURING THE DAY HE WAS ALLOWED TO LEAVE THE PRISON TO WORK! WHAT KIND OF SH!T IS THAT? HIS PUBLICIST SAY'S HE HAD A REACTION TO HIS MEDICATION! DO THEY THINK WE ARE STUPID? HOW MANY TIMES HAVE WE HEARD THAT? BOTTOM LINE IS THIS CHARLIE SHEEN IS A COKE HEAD THAT LOVES PROSTITUTES & BEATS ON HIS WIVES! BUT FOR HOLLYWOOD HE'S THEIR GOLDEN BOY!