WTF! BABYSITTER PUTS A BABY UP FOR SALE ON EBAY! 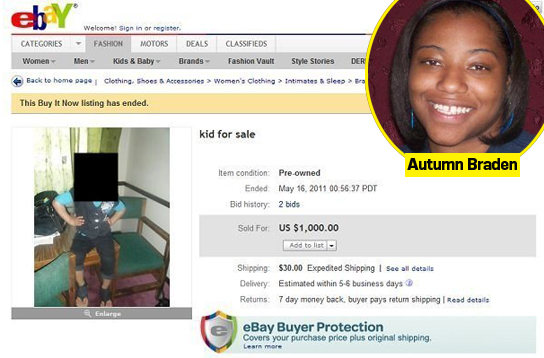 Authorities in Michigan don't believe that the 20-year-old babysitter who listed her cousin's 2-year-old daughter for sale on eBay really intended to sell the child. They thought she might have been trying to swindle someone out of the $1,000 asking price, but she claims it was all a joke.

Whatever her motivation, Autumn Braden of Ottawa County was arrested on felony charges of trying to obtain money under false pretenses. People from all over the country who had seen the ad on eBay called local authorities to report it.

"We believe, at this point, that it was an effort to have somebody pay her some money and then take off with the money and not transfer the child," Lt. Mark Bennett, of the Ottawa County Sheriff's Department told WWJ Newsradio 950. "She had some money issues. She was behind in rent and other things of that sort. So, there was certainly some motivation there."

Braden had been babysitting the child for some time, and claims the ad was a hoax. It looks like the authorities understood this, as they let her off relatively lightly. Charges of attempted false pretenses have been dropped since the sheriff made the above statement, and Braden has been referred to the Kent County Prosecuting Attorney's Diversion Program, which is a little like probation. Her criminal record will be wiped clean upon completion of the program, according to
WoodTV.com.

There is no word yet on whether or not Braden's cousin, the mother of the child, got the joke. But it seems highly unlikely that she'll ever hire Braden again to babysit -- or give her much of a tip.