WTF! 14 YEAR OLD BOY WHO BEHEADED 4 PEOPLE IN MEXICO GETS 3 YEARS IN JUVIE! 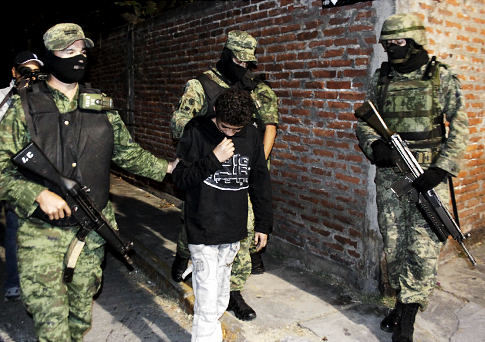 After he was seen on video calmly explaining how he tortured and beheaded at least four people, an American-born teen nicknamed "El Ponchis" was sentenced Tuesday in a Mexican court on kidnapping and murder charges.

The San Diego-born 14-year-old, whose real name is Edgar Jimenez Lugo, received three years in a juvenile prison - the maximum allowed under law.

Lugo was captured in December near Mexico City with his 19-year-old sister who is accused of helping him dump the bodies in December.

Authorities believe that they were fleeing the country after committing some chilling murders.

On the damning video shown in court, a military interrogator asks the unidentified teen: "How many have you killed?"

The curly-haired teen, according to CNN, calmly replies "Four."

When asked how he killed them, he admits "I slit their throats."

The stories of "El Ponchis" - considered one of the most jarring symbols in the bloody Mexican drug war - had become near-legend in the country after a YouTube video circulated reportedly showing the teen beating a man with a two-by-four while the man was hanging from the ceiling.

When he was captured by authorities, the teen said that he was kidnapped at age 11 and had been forced to work for the Cartel of The South Pacific.

At the time he told reporters, "I participated in four executions, but I did it drugged and under threat that if I didn't, they would kill me."