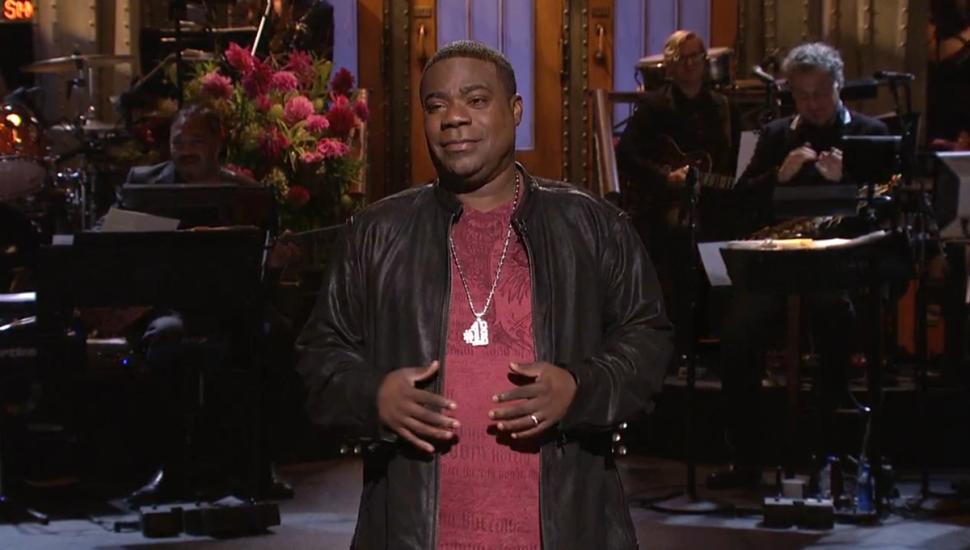 Live from New York, it's a miraculous comeback!

An emotional Tracy Morgan returned to "Saturday Night Live" for the first time since cheating death in a devastating wreck on the New Jersey Turnpike that killed his mentor and fellow comedian James "Jimmy Mack" McNair and left Morgan in a coma for eight days.

"People are wondering, can he speak? does he have 100% mental capacity? but the truth is, I never did!" Morgan 46, joked. " I might actually be a few points higher now!"

Morgan said he called "SNL" boss Lorne Michaels a few months ago to ask if he could host the show when he got better and also thanked his "comedy family" for their support.

It was a star-studded return to "SNL" for Morgan who spent eight seasons as a cast member on the sketch comedy show from 1996 to 2003. He is also known for his starring role on "30 Rock."

His "30 Rock" co-stars including Baldwin Tina Fey, Jane Krakowski and Jack McBrayer turned up during his monologue in a "scene" from a faux "very special" 2012 episode of the sitcom, in which Morgan's character "almost died."

"It was prophetic," Morgan said. "See? `prophetic.' I know how to say the word -- my brain works.

"Who would have thought Tracy's disgusting fantasies and his love of exotic marine life would combine in such a tragic way?" Fey said.

Later in the show Morgan appeared in a "Family Feud" sketch and in another, brought back his one of his more popular characters, inept animal handler, Brian Fellows

In August, Federal investigators found that the Wal-Mart truck driver who was responsible for the crash hadn't slept in 28 hours. The retailer settled a lawsuit with Morgan for an undisclosed sum, but agreed to pay McNair's family $10 million.

As he's recovered, Morgan has gradually returned to work. He briefly appeared at the Emmys earlier this year and has performed a handful of stand-up gigs. It's an amazing return to form for the comic who was so badly injured, he once wondered if he would ever be make people laugh again.

"I wonder how I'm gonna be funny again," he told Matt Lauer in a teary interview last June -- almost a year to the day after the crash.

At the time he promised to return soon.