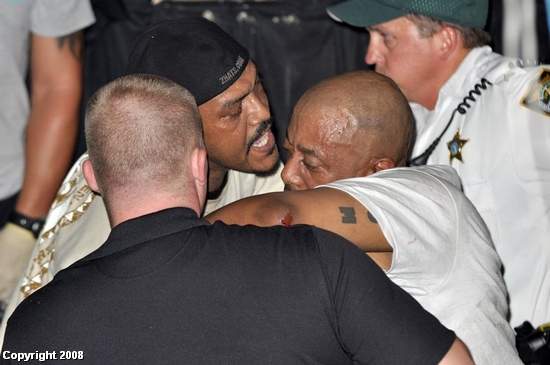 The performer, who was born Anthony Terrell Smith, was taken away in an ambulance, and did not appear to be fully conscious.

It was unclear what caused the rapper’s collapse. During his performance, which was cut short after about six songs, Tone Loc remarked several times about the heat and humidity.

The open-air club on the Portofino Boardwalk is subject to weather conditions, which included temperatures in the low 80s and humidity of about 87 percent, according to weather reports — not unusual for this time of year. Based on a visual estimate, the club was filled to about two-thirds of its capacity at the time of the performance.

Officials from Capt’n Fun Beach Club would not comment on the rapper’s collapse. Lee Tyree, one of the Escambia County Sheriff’s deputies working security at the show, said that Tone Loc had a history of seizures. Emergency medical personnel called to the scene would not confirm the statement.

Tyree had blood on his shirt after helping carry Tone Loc from the club. The blood appeared to have come from a scrape on the rapper’s elbow.

According to the Charlotte Observer’s “Paid to Party” blog, Tone Loc suffered a seizure during a January 2008 performance in Charlotte, N.C., but was able to complete his performance after receiving treatment.

EMTs would not name the hospital to which they were taking the rapper. A call to Gulf Breeze Hospital, the nearest hospital to Pensacola Beach, found no patients registered under the rapper’s birth or stage names.