Tina Knowles Say's Beyoncé Does Not Have 'Public Anxiety' 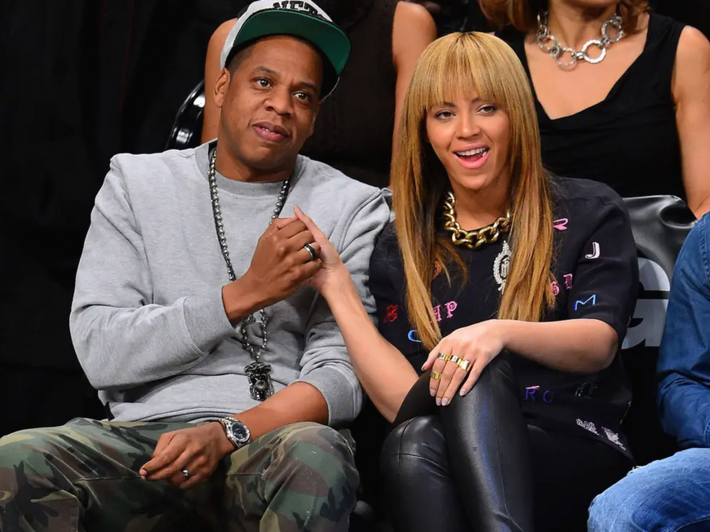 As a couple, Beyoncé and Jay-Z have shared various intimate moments in the spotlight over the years, and the singer's mother, Tina Knowles, has recently opened up about the real reason behind their public displays of affection.

Knowles posted a collage of the "Otis" rapper caressing Beyoncé's leg while courtside at an NBA game, apparently dubbed "The Jayoncé Leg Rub," to Instagram on Sunday. She clarified that the PDA was not because Jay-Z was trying to relieve any of his wife's "anxiety," which people online were apparently questioning.

The post included footage of the two musicians, who've been married since April 2008, on their latest date at the Brooklyn Nets–Milwaukee Bucks game on Saturday. It was captioned with an explanation about the power of touch in their relationship, along with a nod to Knowles' own marriage with husband Richard Lawson.

"When you love someone and like them you just want to touch them! Me and Richard are always touching even if it's just our feet! Yeah!! That's what you do! For those of you who don't understand, Try it sometimes it works!!" she wrote.

The 67-year-old fashion designer went on to clear up any misconceptions about the 28-time Grammy winner suffering from "anxiety in public."

"Human Touch is how you stay connected!! So comical people saying she has anxiety in public and that's why he touches her! Lord people !!!! Yal can turn something good and healthy into something That it's not !!! Stop that!!!!!"

Knowles further noted that if an individual does indeed have anxiety, "then it is great for their partner to touch them to calm and reassure them. That's a beautiful thing," but that "it just happens to be not the case here."

It's unclear where these rumors about Beyoncé having social anxiety originated, or how many people were speculating about it, but some fans have made their own inquiries on Twitter. 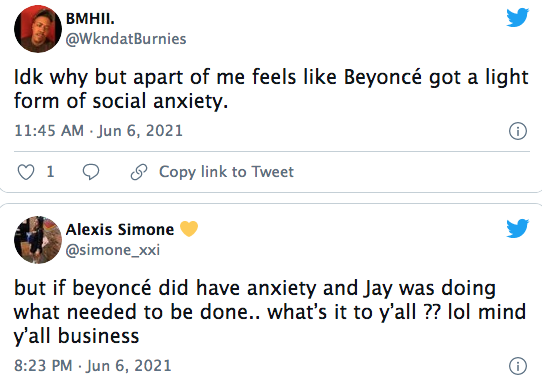 But while Beyoncé apparently doesn't suffer from anxiety herself, she has used her charity initiative BeyGOOD to help those who do struggle with their mental health. The charity partnered with Twitter founder Jack Dorsey to donate $6 million to mental-health organizations during the Covid-19 pandemic.

Back in April 2016, the "Halo" singer has also shown particular concern for women and mental health.

"We have to care about our bodies and what we put in them. Women have to take the time to focus on our mental health—take time for self, for the spiritual, without feeling guilty or selfish," she said in an interview with Elle when asked about the pressures of being perfect.