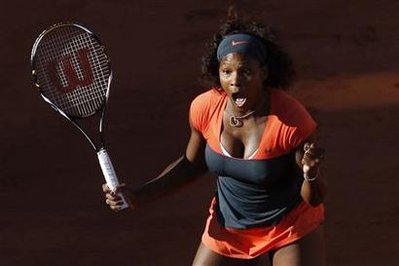 Then consider that the point in question helped Martinez Sanchez win the first set of their French Open match Saturday. Oh, and that Williams had a coughing fit during a third-set changeover. All in all, what eventually became a 4-6, 6-3, 6-4 victory for Williams stands as the latest example of the athlete/actress' penchant for theatrics.

Perhaps. But the 2002 French Open champion, who dabbles in acting, sure seems to find herself in the middle of unique on-court situations.

Even Williams made passing reference Saturday to two episodes by naming the opponents, if not mentioning the details: a 2003 French Open semifinal loss marked by Justine Henin's gamesmanship and Williams' postmatch tears, and a 2004 U.S. Open quarterfinal loss to Jennifer Capriati that contained enough questionable officiating to prompt the introduction of replay reviews in the sport.

At 2-2 in the first set, Williams double-faulted to give a break point to Martinez Sanchez, a Spaniard who is ranked 43rd and never has reached the fourth round at a major. On the next point, Martinez Sanchez raced to the net behind a drop shot that brought Williams forward, too. Williams ran up and smacked a backhand right at Martinez Sanchez.

In what seemed to be an effort to protect herself, as much as to try to hit a volley, the left-handed Martinez Sanchez raised her racket, quick as could be. The ball ricocheted back — off her racket? off her arm? off both? — and past Williams. The point was awarded to Martinez Sanchez, giving her the game.

NBC, which televised the match, showed The Associated Press replays in which the ball appears to glance first off Martinez Sanchez's right forearm, then off her racket, before going over the net. Tennis rules say if a ball touches a player, the point is lost.

As the women headed to the ensuing changeover, Williams tried to say something to Martinez Sanchez, who kept walking. Then Williams spoke to the chair umpire, Emmanuel Joseph, saying, "I felt so bad. I didn't mean to hit her."

Repeatedly pointing to her own forearm, Williams told Joseph, "I don't know why you gave her the game. That's totally not cool."

"She better not come to the net again," Williams said.

At her postmatch news conference, Williams was asked whether she thought the ball touched Martinez Sanchez.

"I didn't 'think' the ball touched her — the ball did touch her, 100 percent, on her arm. The rules of tennis is when the ball hits your body, then it's out of play. You lose a point automatically," Williams said. "So the ball hit her body, and therefore, she should have lost the point — instead of cheating."

Could Martinez Sanchez have been unsure whether the ball made contact with her arm?

"I hit that ball rather hard," Williams said. "She knew that ball hit her."

Asked in both English and Spanish whether the ball hit her, she repeatedly said it went off her racket.

As for Williams' health, the 10-time Grand Slam singles champion said she's been fighting a cold.

"I thought," Williams said, "I was going to cough up a lung or something."