While Pooh Shiesty is currently behind bars, fighting a case, his name is still talked about in the industry. Recently, Wack 100, manager of Blueface Baby has yet again made some shocking claims regarding one Memphis’ very own, stating that the “Back in Blood” rapper cooperated as a federal informant in order to get a lighter sentence. Shiesty’s attorney, Bradford Cohen came to defend his client’s name in his absence, stating that Wack’s claims are an outright lie, under an upload of the audio.  “This is 100 percent fake news. At wack100 there is no paperwork that would say @poohshiesty said a word about anything on anything,” Cohen began. “In fact, none of the 3 charged gave proffers on anything about anything having to do with other people. This is just a straight mistruth. They all took pleas to the same crime of 1 count of a possession of a weapon during a drug crime, none of them gave a proffer about anything, it was a straight plea, with all of them having the other 3 life felony counts dismissed. While Shiesty’s lawyer stepped in the defend his client’s name, it also seems that Shiesty’s mother also had a few words for Wack 100 on social media. “@Wack100 YOUR MAMMY RAISED A B*TCH. MS. GLAYS RAISED A SAVAGE,” she wrote. Just last month the rapper pleaded guilty to one of his charges, throwing away the life sentence that the rapper was initially facing. However, Shiesty is still facing up to 20 years based on his conviction. 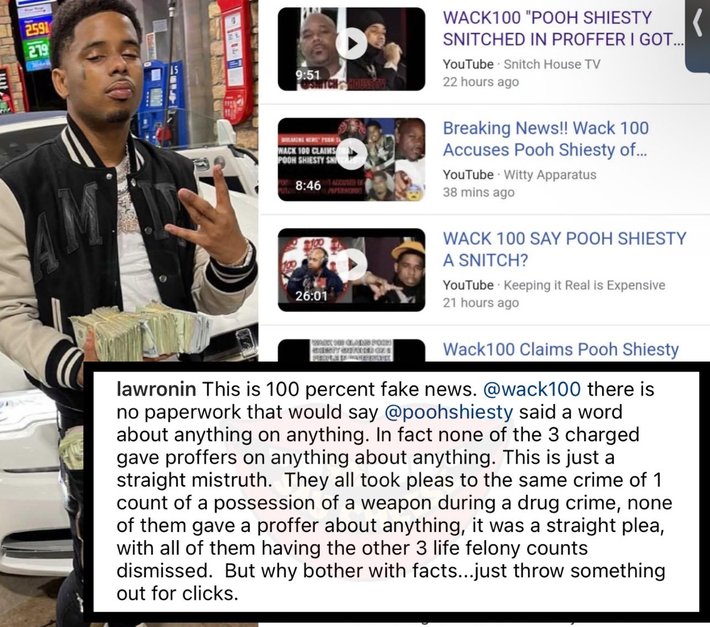