POLICE FIND A HALF EMPTY BAG OF CRACK ON DJ AM'S BODY! 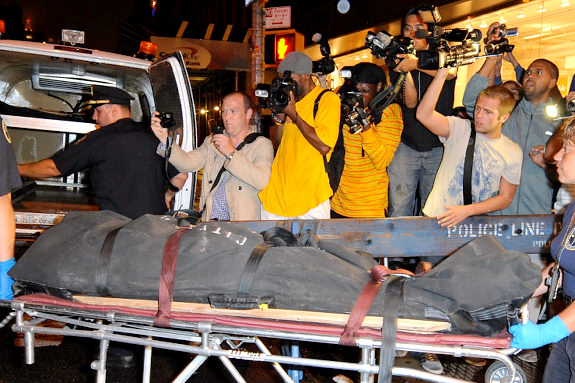 When cops rolled over the body of celebrity spinner DJ AM Friday night, they discovered a near-empty bag of crack stuck to his chest, a police source said Saturday.

The 36-year-old ex-fiance of Nicole Richie, whose real name is Adam Goldstein, was discovered in bed wearing only sweatpants at his $2 million SoHo pad, sources said.

"He hadn't been there long," a police source said.

Investigators found a glass crack pipe in his bedroom and at least seven bottles of prescription drugs on his kitchen counter, including the anti-anxiety drug Xanax, sources said.

Goldstein was on his stomach with the bag of crack underneath him, suggesting he rolled on top of it before he died, a source said.

A friend of Goldstein who had not heard from him knocked on his door, got no answer and called 911. Cops and FDNY workers found the body about 5:25 p.m., police said.

Goldstein's death comes less than a year after he barely survived a plane crash with buddy and musical collaborator Travis Barker, the former drummer for Blink-182.

Four people were killed when the plane skidded off a South Carolina runway. Goldstein suffered severe burns.
"After the accident, he changed," said close pal and fellow deejay Scott Schroer, 36. "He was more humble. He cared more about people and life."

But the harrowing accident changed Goldstein in other ways, too, Schroer said.

Goldstein was slated to star in a intervention-style reality show on MTV, "Gone Too Far," helping teens break their drug addictions and talking about his own substance-abuse battles.

"It makes me feel great," Goldstein said in an interview with Extra in July. "People were there for me when I asked for help, and I had no idea how to stop, so I'm there for them."

In a recent interview with the AP, he talked about holding a crack pipe for the first time in years for the show.

He was supposed to perform Friday night at the Rain nightclub inside The Palms in Las Vegas.

Just last Sunday, Goldstein threw out the first pitch at the Mets game at Citi Field.

His last Twitter message was posted three days ago. He quoted a famous verse by rapper Grandmaster Flash:

"New York, New York. Big city of dreams, but everything in New York ain't always what it seems."

Born in Philadelphia, Goldstein battled addiction, obesity and depression as a teenager.

He landed in rehab at age 17 but returned to the California late-night rave scene and relapsed hard, doing drugs until 10 a.m. in his apartment.

"I would deejay until 2 a.m., go get drugs and stay up until 10 in the morning doing drugs in my apartment," Goldstein told People in 2005.

Goldstein's weight ballooned above 300 pounds, and his cocaine use continued until one night in 1997 when he shoved a .22-caliber gun into his mouth.

"My whole life flashed in front of me, and I knew this was not my destiny," said Goldstein. "I started bawling my eyes out. I was like, 'God, please help me.' "

Goldstein was engaged to Richie in 2005, but the relationship was rocky and they called off the wedding.

A slew of celebrities reacted to Goldstein's sudden death on Twitter.

Singer John Mayer wrote: "We're supposed to lose our friends to time, at an age when we're ready to agree to the terms of having lived a long life. Not now."