PLAXICO BURRESS COPS OUT 2 A GUN CHARGE! WILL SERVE 2 YEARS IN JAIL! 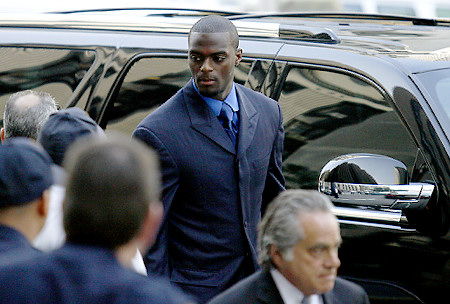 Ex-Super Bowl hero Plaxico Burress took a surprise plea bargain Thursday that will land the talented but troubled wide receiver behind bars for two years.
The unexpected agreement with the Manhattan district attorney came nine months after Burress, 31, shot himself through the thigh with an illegal .40-caliber Glock in a crowded nightclub.

"Do you wish to plead guilty?" asked state Supreme Court Judge Michael Melkonian as a chastened Burress stood before him.

"Is that what you want to do?" "Yes, sir," replied the subdued star, who returns to court Sept. 22 for his official sentencing. He's expected to begin his jail term the same day.

Once he reports to jail, Burress - if he avoids trouble behind bars - should serve about 20 months, said his lawyer, Benjamin Brafman.

Burress limited himself to one- and two-word answers in front of a half-filled courtroom. The lanky wideout left court without speaking to reporters.

The plea came during what appeared to be a routine court appearance.

Burress, whose deal included two years of probation, pleaded guilty to a reduced count of attempted criminal possession of a weapon. The deal was reached just three days after the Giants' first exhibition game of the year.

"This has been a tragic, sad, disappointing situation from the beginning," Giants spokesman Pat Hanlon said.

"Our concern has always been for Plax's welfare, and that continues to be our overriding feeling."

"I think they wanted to set an example with him, which sucks," the fellow receiver said.

"He didn't hurt nobody else."

Mayor Bloomberg, who had called for Burress to receive at least 3 1/2 years in jail, wouldn't second-guess the plea bargain deal.

"I believe the laws should apply to everyone, and the district attorney should treat everyone the same," the mayor said in Queens.

"You'll have to ask the district attorney whether or not he would have made the same deal with anybody."

The Giants, just months after signing Burress to a $35 million contract, cut the star receiver after the shooting.

Burress jumped into a black SUV and left the courthouse without commenting.

Brafman, outside court, said Burress decided to take the plea after an "agonizing period of discussions."

Burress "decided he wanted to put this behind him as quickly as possible," Brafman said. "This is a perfect example of how bad judgment sometimes has very bad consequences."

Brafman said Burress - who will leave a son and a pregnant wife behind when he goes to jail - intends to resume his football career after finishing his time. "I'm disappointed," Brafman said.

"This breaks my heart."

Burress - who caught the game-winning touchdown in the Giants' 2008 Super Bowl win over the Patriots - testified before a grand jury last month in a "Hail Mary" attempt to beat the rap.

He was indicted on two counts of weapons possession and reckless endangerment.

The 6-foot-5 Burress had faced 3 1/2-to-15 years if convicted. Burress wore a dark blue pinstriped suit over a blue shirt as he walked into the courthouse with Brafman around 9:30 a.m.

It was quiet outside the courthouse, with no fans waiting for his arrival.

Burress had a calm expression on his face as he entered the building.

The Daily News has reported Burress was facing an eight-game suspension from the NFL if he tried to return this year.