PIZZA GUY GOES INTO THE MOUNTAINS TO DELIVER PIZZA & FINDS A WOMAN WHO WAS TIED UP, RAPED & BEING HELD CAPTIVE! 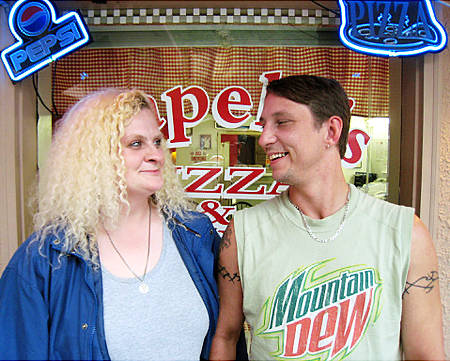 Chris Turner normally wouldn't drive into the remote Tennessee mountains just to deliver a pizza. The one time he did, he came upon a scene that drained the color from his face and made him "numb from head to toe" — a woman with her hands tied, silently begging him to call for help.

It was no joke, and Turner, 32, rushed to a nearby house and made the call. Police say the woman was jogging in her Atlanta neighborhood when she was whisked away by a man who frequented her business. Authorities say he drove her off, raped her and held her captive inside a cabin. The 24-year-old woman was rescued by Sevier County deputies on Tuesday evening because of Turner's quick thinking.

Turner told The Associated Press on Friday that he noticed the woman pop up from a couch while the suspect signed the credit card slip.

Turner at first thought it was a joke.

"When I realized what was going on, I went numb from head to toe and turned pale white," he said.

Turner tried to look calm. "Have a nice day. Enjoy your food," he told the suspect, who tipped him $5 on a $37.69 bill. Then he rushed back to his van, where his wife, Nease, was waiting behind the wheel.

The cabin location was out of cell phone range. So they drove to a nearby house and called police. They waited to make sure the suspect didn't flee. Then Turner stayed to see the man arrested and the victim taken away in an ambulance. "I wanted to make sure she was OK," he said.

The woman told authorities she was jogging near her home about 11:50 a.m. local time Tuesday when a frequent customer at a restaurant and bar owned by the woman and her husband asked her to see his new car. She got into the vehicle, which turned out to be a rental, and was immediately tied up.

She told police the suspect drove her more than 200 miles (321 kilometers) to the cabin in Tennessee and raped her. The Associated Press does not identify alleged sexual assault victims.

Police arrested David J. Jansen, 46, of Snellville, Georgia, without a struggle on charges of aggravated kidnapping and rape, Sheriff Ron Seals said in a statement. He was released on $800,000 bond late Thursday. His attorney, Donald Bosch of Knoxville, had no comment Friday.

Capt. Jeff McCarter refused to discuss the case Friday. But he earlier told The Mountain Press newspaper that officials believe the woman was in imminent danger.

The victim and her husband visited Turner at Capelli's Pizza and Subs in Gatlinburg before heading home Wednesday. "She was just thanking me ... for trusting her," Turner said. "She said he was going to kill her ... after he got done with her."

Turner's boss, John Henry, said the cabin was about 30 miles (48 kilometers) from his pizza shop.