O.K. SO! PINK IS ONLY BI SOMETIMES! 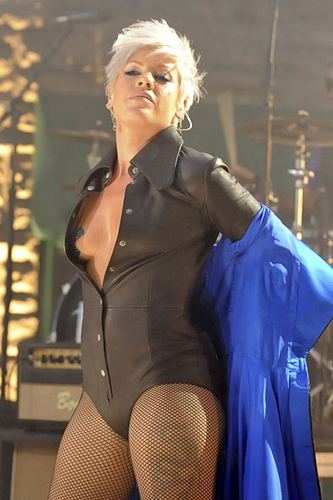 Singer Pink is pretty peeved that she was quoted as saying she's bisexual.

After years of denials, the married "Who Knew" singer reportedly confirmed she has a thing for the ladies. But she says it was all made up.

"I'm not embarrassed about being bisexual. This is who I am," Pink (nee Alecia Moore) is quoted as telling Britain's News of the World.

Pink reportedly added that she would be "just as happy with a new women" if things with hubby Carey Hart went south.

"I'm not complicated," she says. "I sing about love in all its shapes, forms and colors."

Pink's rep tells the Daily News that the interview was "entirely fabricated."

The singer was cagey about the story on her Twitter page, writing, "I just read that I'm bisexual. So 1991. Good thing people write articles about me so I can get my facts [straight]."

Pink has previously insisted that she wasn't into the idea of having a same-sex romance.

"I'm not gay so I guess I would not try a relationship with a woman," she told NOW magazine last year. "I didn't say I haven't experimented, but I love men too much to make it a permanent thing."

The 29-year-old's alleged revelation comes on the heels of Hart's announcement that the estranged couple are reconciling.

"We're rebuilding," her hubby told People magazine in April. "Sometimes you have to take a couple of steps backwards to move forward."