LeBron James is getting ready for Year 20 of his historic NBA Season. Lacing up for the fifth season with the Los Angeles Lakers, King James will debut the LeBron XX, a sneaker built for the next generation. The LeBron XX is the lightest version of his iconic sneaker ever, featuring a low-top silhouette with a sleek, opulent aesthetic. The new sneakers also celebrate both LeBron’s 20th year at Nike and in the league. The forefoot and heel Zoom Air units, as well as the carbon fiber midfoot shank, are the shoe’s primary features. The forefoot has a top-loaded Air Zoom Turbo unit for underfoot cushioning, and the heel has a bigger Zoom Air unit that is 13 mm thick to help with impact protection. The lateral guardrail is synthetically wrapped to help keep the foot over the footbed secure. An all-around outsole design secures the ground. Make no mistake: The performance build of the LeBron XX has its sights set on the next 20 years, despite the legacy touches found throughout the shoe that pay homage to the past. “We saw the XX as a chance to celebrate the next 20 years for LeBron,” says Jason Petrie, Senior Footwear Designer for Men’s Basketball and lead designer of the LeBron line since the Zoom LeBron VII. “The stitched tag inside the tongue says, ‘Designed and Engineered to the Exact Specifications of the Next Generation.’ We took that line seriously as we designed the shoe. We had players like LeBron’s sons Bronny and Bryce in mind. We wanted to get in their heads and learn about what young players were looking for. 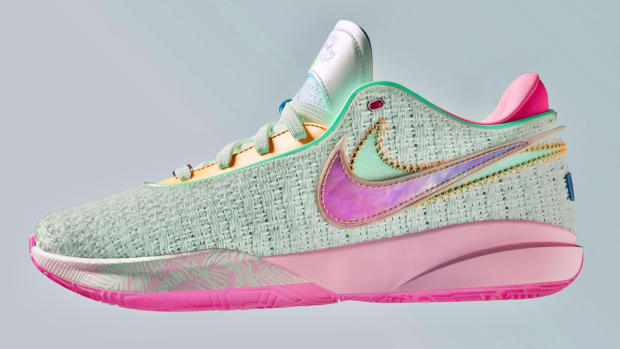