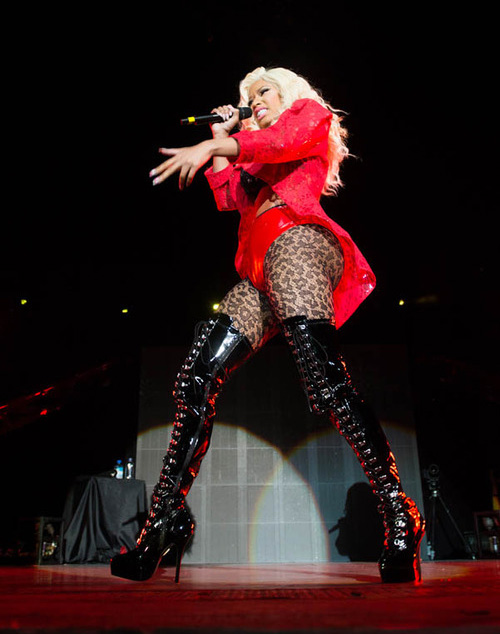 Despite patching things up after this year's Summer Jam fiasco, it looks like Nicki Minaj is at odds with Hot 97 once again. Now, in a recent interview with Cipha Sounds and Rosenberg, Hot 97's program director Ebro says Nicki told him she doesn't want the station playing anymore of her music.

Ebro explained that the most recent tiff with Minaj began after he said that Rosenberg's comments ruined her career when her rap-heavy Pink Friday Roman Reloaded: The Re-Up only moved 36,000 units upon its release. According to Ebro, the YMCMB starlet called him from overseas, insulted him and demanded he never play her music on air again.

"I said, 'Rosenberg ruined Nicki Minaj's career' - evidence suggests based on this Re-Up release, the things [Rosenberg] said about her being pop and selling out and making that pop music came back to haunt her," he said. "Now, she puts six rap records on this album and it didn't sell…I get the phone call, the international number pops up, I answer the call, it's my friend Nicki Minaj, who then starts to proclaim how I'm fake. She used every woman's stab she could - 'I thought you were a man, you're a cornball, I thought we were friends, you're fake, everyone told me you were fake'…I said, 'Nicki, I'm helping you. I'm keeping you in the Hip Hop conversation. This Hip Hop thing's a competition; you're either ringing, or you're not, and just like I said yesterday, i love you, boo and I'll dust you off and make sure this thing is popping off again.' And she goes, 'Don't ever play my music again'…of course we are [still playing Nicki Minaj], I love Nicki Minaj."