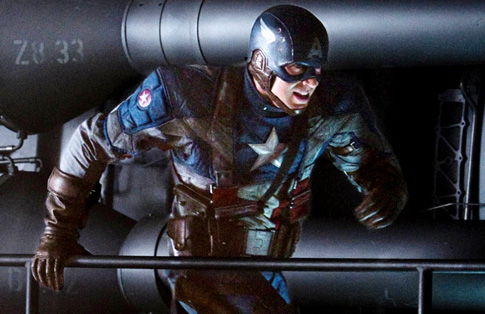 Things are looking good for America, or at least Captain America.
The official trailer for "Captain America: The First Avenger" has come out and things seem promising on the superhero movie spectrum.

In this newest vein of comic book flicks, Chris Evans of "Fantastic Four" fame takes the lead as Steve Rogers, the wimpy orphan who turns into Captain America, the living symbol of freedom.

Based on the Marvel comic of the same name, the movie follows the story of Captain America, from humble beginnings to the Nazi-fighting, perfect human.

The trailer shows a sickly looking Evans enlist in the Army only to perform miserably before being offered to participate in a top-secret Army project called Operation: Rebirth.

With one injection of Super Soldier Serum, Evans turns into a chiseled butt-kicking Adonis.

For those doubtful of Evans' superhero chops thanks to the less than impressive "Fantastic Four" franchise, the trailer also supplies screen-pleasing special effects, not to mention a serious amount of acting talent to back him up.

Tommy Lee Jones of "Men In Black," Stanley Tucci and Hugo Weaving of "The Matrix" round out the cast with Weaving as the arch-nemesis Red Skull, the devilish Nazi mastermind set to take out World War II era-Europe and America.

Evans had initially turned down the role, the first in the upcoming Avengers franchise which will bring Robert Downey's "Iron Man", "Thor" and "The Hulk" into one feature.

"I kept saying no; they kept coming back," he told GQ. "And eventually I was like, 'You know what? This is your biggest fear - this is exactly what you have to do.'

Comic book fans can see whether the movie does Captain America justice on July 22.