NANCY GRACE HAS A NIP SLIP ON DWTS! 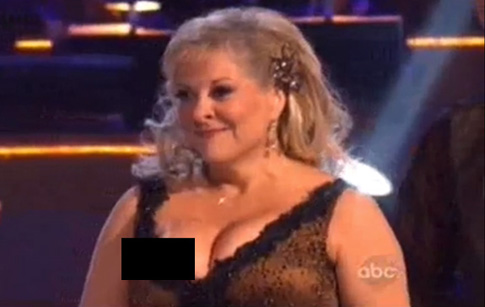 It's not that kind of dancing, Nancy!
On Monday night's "Dancing with the Stars," CNN host Nancy Grace suffered the season's first wardrobe malfunction.

Shortly after she and partner Tristan McManus completed their quickstep, Grace approached the judges' table and unknowingly beamed as the top of her dress had dipped a bit low and exposed her right breast.

"On the European version that would be perfectly fine," host Tom Bergeron said as the camera panned away to show the audience in order for Grace, 51, to readjust herself.

Judge Bruno Tonioli told her, "I got an eyeful! I couldn't miss that. But it really is great to see you taking over the dance floor and performing."

After the show, Grace tried to downplay what happened.

"When we were doing our hop scotch portion of our dance, there was a little bit of movement but it did not rise to a wardrobe malfunction," she told Entertainment Weekly.

"We have got every precaution known to man in this dress right here. I'm talking industrial strength precautions. So there may have been a little bit of, as Tristan said, jiggling," she added.

Despite the undeniable anatomical peek, the judges weren't swayed by Grace's performance at the end of the night.

She ended up earning 21 out of 30 possible points for her dance, coming in behind the night's scoreboard leader, Ricki Lake, who earned 23.