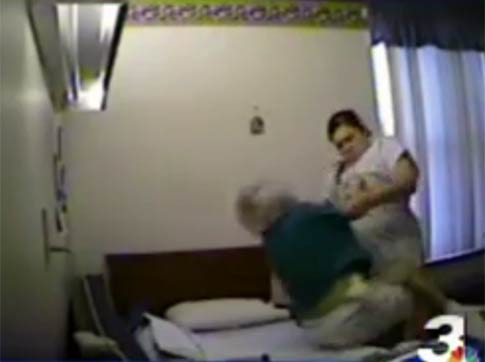 An Ohio nursing home is under fire after a hidden camera installed by a patient's son caught caregivers brutally abusing his elderly mother, according to a report.
Two nurse's aides were fired from the Prentiss Center for Skilled Nursing Care in Cleveland and a third was disciplined after they were filmed manhandling 78-year-old Esther Piskor, an investigation by Cleveland's WKYC television revealed.

One of the aides, Virgen Caraballo, was charged with felony assault, and police were investigating other workers at the home. Caraballo pleaded not guilty.

The state Department of Health cited the center, run by Cleveland's giant MetroHealth health care system, for failing to prevent the abuse.

Piskor's son, Steve, told the station that he hid a camera inside a fan on his mom's dresser after the home ignored his complaints that his mom was being beaten up.

His mother, a grandmother of 25 who has Alzheimer's, had red welts on her face and raised her hands in fear whenever he visited, Piskor complained.

"MetroHealth said I was taking things out of context and taking it too far," Piskor told WKYC. "They made me out to be the trouble maker, the complainer, the bad guy.

"The administrator at one point told me accidents happen and mistakes are made."

But his hidden camera footage told a different story.

One video shows Caraballo jerking the helpless granny out of her wheelchair and tossing her on her bed like a rag doll.

Later, other brutal aides push Piskor's face against the wall, slam her into a wheelchair and punch her in the face.

Amazingly, Piskor posted signs around the room that the workers were being watched, but the abuse continued.

"I only showed them two videos and they got so upset they were actually crying," Piskor told the station.

Dr. James Campbell, the chief of geriatric care at MetroHealth, said the hospital was "incredibly sorry."

But he denied that Piskor's earlier complaints were ignored, saying both the hospital and the health department investigated the claims but didn't find anything.

"The unfortunate part is those investigations didn't reveal what this video has now revealed," Campbell said. "With 20/20 hindsight, I sure as heck wish we'd have done something sooner."