LOL! RUSH LIMBAUGH DANCES TO LADY GAGA LIKE HE'S ON SOME SPEED! 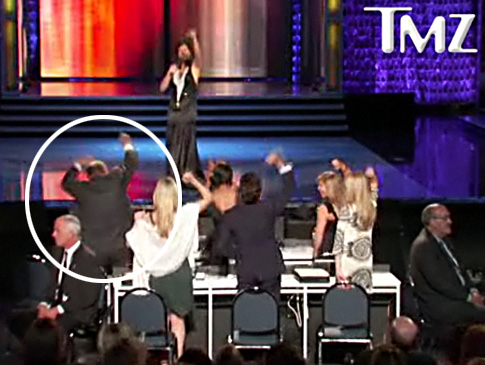 The conservative radio host - who's a judge for Saturday's Miss America Pageant on TLC - was caught on camera busting a move to the provocative pop star at a pre-pageant event.

According to TMZ.com, Limbaugh was taking part in a "Judge the Judges " contest when Gaga's song "Poker Face" came on for the dance portion. After a moment's hesitation, Rush puts the rest of the judging panel to shame with a series of fist pumps and booty shakes.

The moves earned him a pat on the back from fellow judge Vivica A. Fox, and some words of praise from the event host: "Give it up for Rush Limbaugh ... and the rest of you!"