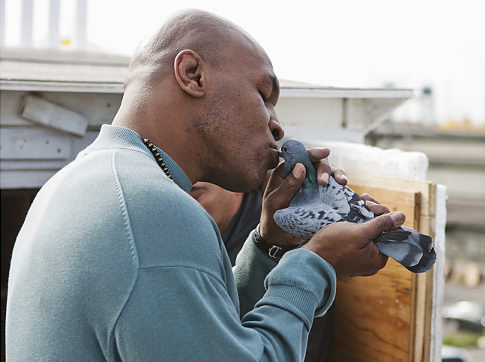 It's no secret that tough guy Mike Tyson has a soft spot for birds. Pigeons, to be exact.

The former heavyweight champ and "The Hangover Part II" star opened up about his love for his feathered friends, who have become like family to him over the years.

"These birds over here, I've had since I was 14 years old," he told CBS News' Bill Whitaker. "They're like my brothers and sisters. My friends. 'Cause I don't have to worry about them asking me for any money or try and get over me or do anything or try to hurt me for any reason."

His passion for the animals has even sparked the Animal Planet series "Taking on Tyson," in which the boxing champ discusses the care for and personalities of his many pigeon pets.

At the height of his career, Tyson was earning an estimated $400 million.

Now, he says, his passions are limited to his birds, his family and his children - not booze, crack and women.

"My life is a struggle," the father of eight said. "This is not easy. In order for me to make this work, I have to kill my ego. I can't have an ego in order to allow this to work."

Tyson even went so far as to flippantly dismiss his many heavyweight belts as nothing but "garbage."

"I can say I bled for garbage," the former heavyweight champion said. "At one time it meant a lot - when you're just a young kid, this is everything to you. But then you realize your priorities change. And you just want your children to be happy and do nice things and that makes you happy.

"This stuff is nothing. This is just nothing, man."

"I can't handle being that guy," he continued. "You know, that guy's a creation. Iron Mike, the baddest man on the planet. There's nobody like that. People like that don't exist. I just had the audacity, the idiocy, to say it."

When interviewer Whitaker asked Tyson where his former beastial boxer persona has gone, Tyson was resolute.