LMAO! CHRISTINA AGUILERA SAYS IT WAS SPRAY TAN RUNNING DOWN HER LEGS! 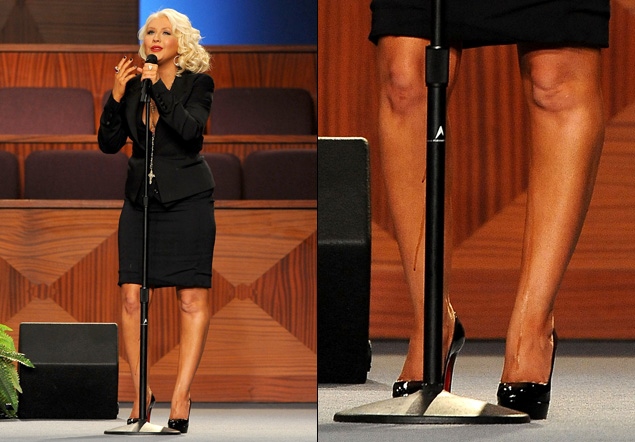 Christina Aguilera may have delivered a heartfelt performance at Etta James’ funeral on Saturday, but the singer’s tribute was overlooked when spectators caught a glimpse of her dirrty legs.

While belting out James’ classic song “At Last” at a Los Angeles-area church, Aguilera appeared to have suffered a beauty blunder as streaks of what appeared to be fake tanner ran down the side and front of both her legs.

The songstress, clad in a cleavage-baring blazer and hip-hugging black skirt, seemed unfazed by the faux pas as she sang, however video shows her subtly wiping away the liquid with her sleeve before beginning her first note.

She is again seen casually using her left leg to blend the stain on her other leg towards the end of the song.

It remains unknown what caused the dark lines to drip, however it is recommended to let a fake tan dry for at least a few hours before coming in contact with liquid – or perhaps in Aguilera’s case, working up a sweat.

This isn’t the first public mishap for the 31-year-old performer. Within the past year, the singer has taken a tumble onstage at the Grammy Awards and butchered the National Anthem during the 2011 Super Bowl.

Regardless, Aguilera didn’t let her embarrassing tan lines get in the way of her tribute.

"Etta wasn't just any performer, she was a strong woman whose talent came from a place so deep it moved people in ways they never felt before. Losing her was, to me, like losing a part of my soul,” Aguilera told People the following day.

"I can only hope that she felt the love in the room as we all came together to pay tribute to her and celebrate her life as a person and as an artist. She will be deeply missed and I thank her family for allowing me such a great honor."

James died on Jan. 20 at the age of 73 after a long battle with leukemia and complications from dementia.

That's the lamest sh!t I ever heard! Spray Tan! C'Mon Son! LMFAO! And only dripping on the inside of her thighs? I mean how stupid do they think we are! Christina Aguilera need to take a time out & fire her f**king publicist for that lame sh!t!