LINDSAY LOHAN GOT ARRESTED IN NYC FOR PUNCHING A B!TCH IN HER FACE! 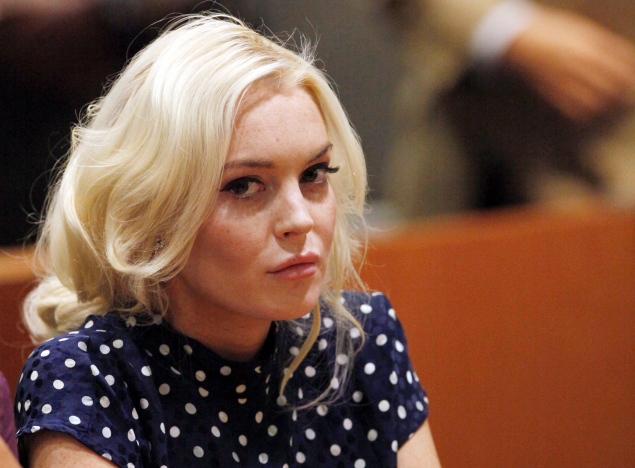 It's a sentence you've heard many times before: Lindsay Lohan was arrested early this morning.

The "Liz & Dick" star allegedly punched a woman in the face at the Manhattan nightclub Avenue at 4 a.m. on Thursday morning, a spokesperson for the NYPD confirms to omg!. The 26-year-old actress was arrested and charged with assault. She was later released after being issued a desk appearance ticket for a future unspecified date. Lindsay exited the police precinct at about 8 a.m. wearing the green dress she wore out the night before (with the front unzipped to nearly her waist) and a jacket over her head.

The woman she allegedly hit was not expected to face charges, reports NBC New York.

Lindsay just can’t seem to stay out of trouble. Still on probation for a 2011 necklace theft, she has had three other run-ins with police in New York since September. They include a hit and run (charges were later dropped), a fight with a man in her hotel room (charges against him were later dropped), and a domestic dispute with her mother, Dina Lohan, in which Lindsay alleged that the 50-year-old was high on cocaine (no charges were filed). Lindsay later said she lied about her mother's drug use.

Back in Los Angeles, Lindsay crashed her rented Porsche into a truck in June, then allegedly lied to police saying she wasn’t driving. Charges are still pending on that case, but she reportedly will have her probation revoked.

There have been other incidents as well this year that didn’t involve police, including an unpaid hotel bill in the amount of $46,350 at Chateau Marmont (it was later settled), and a $140,203 tax lien (her “Scary Movie 5” co-star Charlie Sheen gave her money to settle her debt with the IRS, the actor's rep confirmed to E!).

Lindsay keeps saying that she wants people to focus on her acting career, not her drama-filled personal life, but she's not giving us much of a choice. She made one TV movie this year (which was largely panned) and has had at least five police run-ins. (We won’t even get into the time paramedics were called to her hotel room after she was found "unresponsive.")

From far away Lindsay looks good

From close up! Not so much

Ya'll don't want it with fire crotch tho! She'll f**k a b!tch up