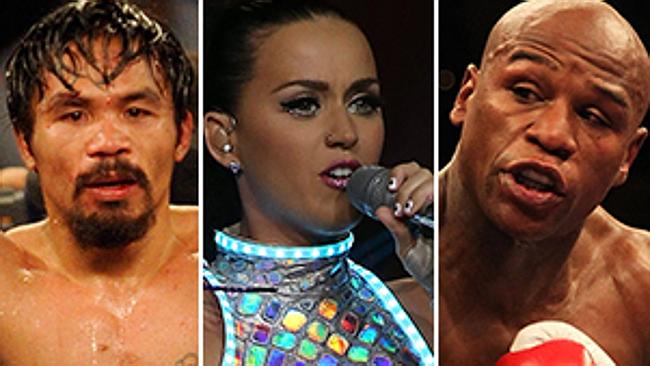 Floyd Mayweather and Manny Pacquiao are punching above all of Hollywood on the Top 100 Highest-Paid Celebrities list.

Forbes revealed its annual line-up earlier this week and the two boxers, who fought each other in May, held the top spots with Mayweather raking in a whopping $300 million and Pacquiao coming in second with $160 million.

Katy Perry covered the special issue of Forbes and was named the highest-earning woman, making $135 million.

"Before accepting the offer to be on the cover of Forbes, I was told that a lot of women have previously shied away from doing it," Perry wrote on her Instagram about the honor.

"I wondered if it was because they thought socially it would look like they were flaunting or bragging or it wasn't a humble decision."

Perry went on to offer some advice to her predecessors.

"Ladies, there is a difference between being humble and working hard to see the fruits of your labor blossom, and your dreams realized. Hopefully this cover can be an inspiration to women out there that it's okay to be proud of hard earned success and that there is no shame in being a boss. Also... don't think that I didn't celebrate this moment by going straight to Taco Bell and getting my crunch wrap supreme."

Other stars including One Direction, Howard Stern, Taylor Swift and more made the top 10.