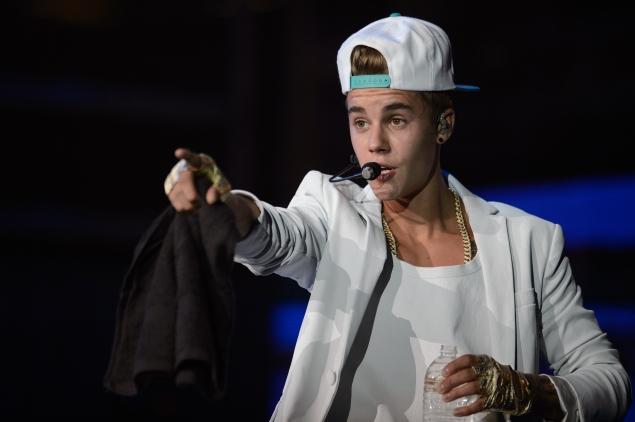 The singer breathed new life into his burgeoning bad-boy image Friday when he touched down at Teterboro Airport with a strong odor or cannabis wafting from the cabin, sources told the Daily News.

Shortly after the first pup started poking around, a second dog was called the join the hunt, the source said.

Bieber, 19, was isolated from his dad and other members of his entourage and escorted away from the aromatic aircraft for further investigation, an airport employee told Confidenti@l.

“He was taken away in an unmarked police vehicle and was being detained,” the employee said Friday.

The employee said it’s believed a member of the flight crew became so annoyed with the robust reefer during the international flight, the staffer tipped off folks on the ground.

Bieber’s dad – who was with the singer during his drag racing DUI bust in Miami Beach last week – was seen wandering around Teterboro in a tizzy, trying to get more information on the whereabouts of his famous son, the employee said.

Four hours after the flight landed, officials were still investigating as of 6 p.m., the law enforcement source said.

Bieber reportedly is in town to watch the Super Bowl on Sunday.

The latest stop on his recent reign of terror came just hours after TMZ reported that radio volume triggered the limo driver assault now causing him legal static in Toronto.

The pop phenom was riding in a rented limo with five members of his entourage Dec. 30 when he wanted the cabin music turned up, unidentified sources told TMZ.

The driver complied, but not enough for the Biebs, so an altercation erupted, TMZ said.

In the course of the argument, a man struck the driver in the back of his head “several times,” Toronto Police previously said.

Bieber, 19, was charged with the assault Wednesday night and had to weave through a crush of media and fans outside a Toronto police station to get booked and fingerprinted.

He was given a March 10 court date and released.

An unidentified source close to Bieber reportedly told TMZ that the hard-partying hitmaker never laid a hand on the driver – that it was one of his friends who turned violent.

The source would not reveal the identity of the friend, TMZ said.

“We anticipate that this matter will be treated as a summary offense, the equivalent of a misdemeanor in the United States,” Bieber’s lawyer Howard Weitzman said in statement to The News.

“Our position is the Mr. Bieber is innocent,” Weitzman said.

Bieber’s Toronto bust came after he got popped for DUI in Miami Beach last week.


Cops said the Canadian pop star was drag racing a loaner Lamborghini on a residential street shortly before he cussed out his arresting officer with several F-bombs.

The singer tested positive for marijuana and Xanax and blew 0.014 on a Breathalyzer test, prosecutors and police confirmed Thursday.

He pleaded not guilty Wednesday ahead of his formal arraignment set for Valentine’s Day.

The once squeaky-clean singer also is the subject of a felony vandalism case in southern California. A dozen deputies with the Los Angeles County Sheriff’s Department raided his mansion Jan. 14 looking for evidence to support the claim he egged a neighbor’s house on Jan. 9, causing some $20,000 in damage.

One legal expert said it’s likely Bieber will have to plead “no contest” to at least one of the misdemeanors in Miami Beach to avoid trial – and that would almost certainly land him on probation.

“He might be skirting things right now, but he’s on thin ice. Even one no contest plea on a misdemeanor will mean he’ll be regulated with probation, and if he violates that, then he could be thrown in jail,” Brian Claypool, a criminal lawyer in Pasadena, Calif., said Friday.

Obama spokesman Jay Carney had no comment Friday other than saying a response of some type should be expected.

“That process will occur, as is our commitment,” he said. “There will be a response when the threshold is crossed. That response will come, I’m sure, relatively soon. I don’t have one now,” he said.

The petition had more than 224,000 digital signatures as of Friday afternoon.

A counter-petition to “stop” the proposed deportation had 5,785 signatures.

Meanwhile in Miami Beach, an unidentified female officer is the subject of an internal affairs investigation after she allegedly tried to snap an unauthorized photo of Bieber in custody, police said.

“The officer is still working pending the outcome. We’re investigating her for conduct unbecoming of an officer,” Sgt. Robert Hernandez told The News. “She didn’t accomplish the photo. The Sergeant in charge saw what was happening and told her to leave before any picture was taken.”