Jodeci Got A New Album Coming Out JODECI have set March 31, 2015 as the release date for their highly anticipated new album and one of the biggest R&B events of the year—The Past, The Present, The Future[Sphinx Music Entertainment/Epic Records]. The digital pre-order for the group's fourth full-length LP and first for Epic Records, is now live on iTunes, and it engages an instant download of the lead single "Every Moment." You can pre-order the album on iTunes, Amazon, and Google Play. When you pre-order the album you receive "Every Moment" instantly along with an instant grat track "Checkin For You."

If you haven't heard "Every Moment," listen now!

The legendary and influential multi-platinum R&B dynamo have given fans an appetizer to savor with a tease of their music video for "Every Moment" via Complex Magazine. The music video is available to view on VEVO today. Helmed by iconic music video director Hype Williams and creative concept by Breyon Prescott, the video's story goes down in snowy Aspen, CO. In epic fashion, it commences with a grandiose and breathtaking opening shot of DeVante Swing playing a baby grand piano on top of a mountain overlooking the world below. Donning all white and looking heavenly fly, K-Ci, DeVante, JoJo, and Mr. Dalvin take flight like never before with one of their most divine refrains yet. The video has already been added to MTV Jams, VH1 Soul and Centric revealing early indications that JODECI has yet again created another momentous visual.

The Past, The Present, The Future is exclusively executive produced by Devante Swing, Louis Burrell, Lajuanna Burrell, and Breyon Prescott with co-production by Timbaland on "Incredible" and "Those Things." Among its 12 tracks are "Every Moment," the soulfully striking "Nobody Wins" feat. B.o.B, the beautifully titled "Jennifer," and more. Full tracklisting is below.

JODECI is here for the past, present, future, and beyond.

JODECI first arrived in 1991 with their triple-platinum debut, Forever My Lady. That album became Billboard's "R&B Album of the Year" and yielded three smash #1 singles—"Stay," "Forever My Lady," and "Come and Talk to Me." JODECI's 1993 follow-up not only topped charts and went platinum, but it also introduced the world to both Timbaland and Missy Elliott. Their platinum-certified final offering, The Show, the After-Party, the Hotel debuted at #2 on the Billboard Top 200 and cemented their musical legacy. In November 2014, the group made their formal return to the stage, performing a medley of hits at the Soul Train Awards. Now, they stand poised to once again rule R&B.

The Past, The Present, The Future tracklisting:

Too Hot
Sho Out
Checkin For You
Those Things
Every Moment
Nobody Wins feat. B.o.B
Incredible
Jennifer
Body Parts
Stress Reliever
Sho Out feat. Liana Banks
Nobody Wins 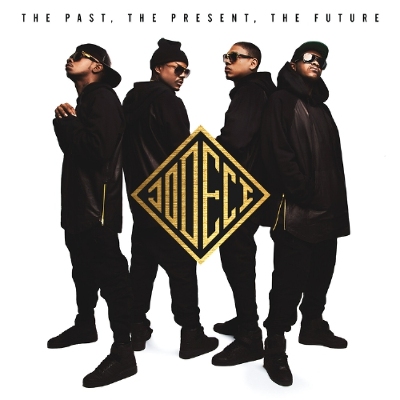