JAY Z OPEN'S UP BARCLAYS TO SOLD OUT CONCERT! 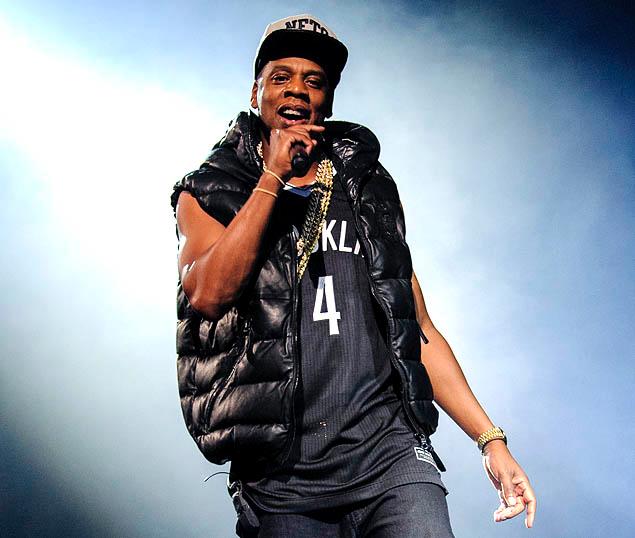 Brooklyn's own Jay-Z ushered in a new era Friday night, christening the Barclays Center to the screams of thousands of hip-hop fans who called the venue their Ebbets Field.

The enthusiastic crowd standing in the rain under the massive 360-degree screen looming 30 feet above Atlantic and Flatbush Aves. let out a loud cheer when the doors to the arena opened for the first time at 7:10 p.m.

Inside, wide-eyed concertgoers postponed heading to their seats for the first of eight scheduled Jay-Z concerts and explored the venue — the borough’s $1 billion answer to Madison Square Garden. “It looks dope from the outside. It’s still spacious but not too far from everything. If you’re from Brooklyn you have to be here tonight,” said Jovan Scott, 31, a firefighter from Flatbush. “As a Brooklyn fan and a Jay-Z fan, it doesn’t matter how much it costs. I have to represent.”

Before Hova took the stage, videos played of other big moments in Brooklyn history: the borough’s founding, the completion of the Brooklyn Bridge in 1883, the demolition of Ebbets Field in 1960.

Then he emerged just before 10 p.m. to the arena’s first roaring crowd, sporting a custom Brooklyn Nets jersey with “Carter” on the back.

“Tonight is a celebration of the borough where I’m from,” Jay-Z said, who was joined onstage by Big Daddy Kane. “Welcome to my house."

The developer of the arena, Bruce Ratner, hopes people buy into the Brooklyn “brand” he and the rapper promote so aggressively. 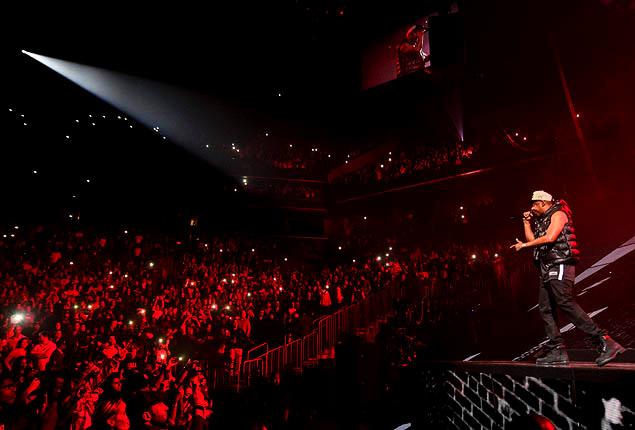 Jay-Z was everywhere. The rapper’s 40/40 Club inside the arena was a madhouse — tennis star John McEnroe was spotted being ushered inside.

On opening night an old standby, Nathan’s hot dogs had one of the longest lines, along with servers of Stoli vodka.

“Tonight is a celebration of the borough where I’m from,” Jay-Z said, who was joined onstage by Big Daddy Kane. “Welcome to my house."

Even in the exclusive suite level long lines for food curled through the plush hallways.

Locals hailed the new venue that will host the likes of Neil Young, Bob Dylan, Barbra Streisand and Leonard Cohen.

“This is amazing,” said Keenan Davis, 35, an Internet marketer from Crown Heights. “I remember hanging out near Ebbets Field after it shut down and listening to the older guys talk about their memories of that place. This is our Ebbets Field.”

Around the corner on Atlantic Ave. VIPs like Magic Johnson and Giants receiver Victor Cruz entered on a black carpet — the new color of the Nets, who will play their first preseason game there on Oct. 15.

Brooklyn Borough President Marty Markowitz, one of the arena’s loudest supporters since its inception in 2003 as the centerpiece of the Atlantic Yards development, was glowing with pride.

He said the opening was one of his top Brooklyn moments — right up there with seeing the Dodgers win the World Series in 1955.

“The same sweet memories I had watching a team of our own — guess what? The kids of Brooklyn will have those same memories,” Markowitz said.

Locals have long feared that the 19,000-seat arena in the heart of the borough would create a traffic nightmare above one of the city’s busiest subway stations.

But in the first hours of its opening, Brooklyn kept the peace — the chaos was nowhere to be seen.

Trains ran on time, police guided traffic moving at a typical pace, and most concertgoers arrived from a new subway entrance that directed them straight into the arena. Parking was hard to find on the street – many who drove to the arena said they forked out $36.62 to park in the nearby lot at the Atlantic Terminal mall.

“It’s not as bad as I feared,” said City Councilman Steve Levin. “It looks like a regular Friday night. Maybe just a little worse.

“There’s cops and traffic agents all over and they are definitely keeping things moving.”

But those concerns were dwarfed by the feeling of history being made.

“The Garden is okay but it’s not topping this!” said Shalon Perkins, 21, of Crown Heights. “This means everything to me. I love Jay-Z and I love Brooklyn! This is the greatest night of my life.”

Outside, a new economy was already developing.

Scalpers were selling nosebleed seats to the concert for $200. Premium seats were going for as high as $1,500.

Bars in the area were bumping.

“Look at this place. It’s packed!” said Eddie St. Louis, a co-owner of Machavelle Sports Bar and Lounge on Pacific St., which featured a big Nets banner right by the television.

“All of this is because of that,” he added, pointing to the arena.

As throngs of people spilled out into the Brooklyn night, one new member of the Nets said he was ready for the future.

This is Rich Porter, part two
You can stunt like that when you’re rich before your debut
Money and the murk, rapper or the trapper
Either way I’m gonna serve ya
Shooters on my team… No really, I got shooters on my team
Juan or Deron
How you niccas want it, pick a arm
They call me Lucky Lefty…
Ball so hard I don’t respect the !!in’ referees