Jay Z Not Answering Questions About His Deal With Barneys 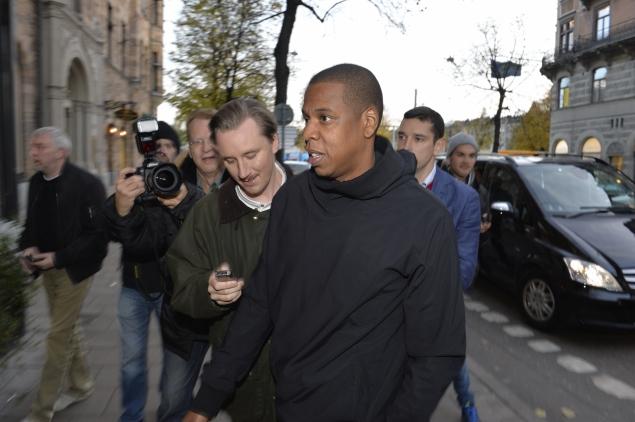 Brooklyn rapper Jay Z got tongue-tied Friday as Swedish paparazzi swarmed him and demanded to know if he’s going to sever his business ties with Barneys.

The 43-year-old music mogul has maintained radio silence all week after news broke that two African-American shoppers said they were racially profiled while buying luxury items at the snooty store.

“Jay Z is not allowed to speak on this matter,” said one of the rapper’s henchmen after a photographer stuck his head in the rapper’s car in Stockholm.

The performer is in Sweden for his “Magna Carter” tour.

Shawn (Jay Z) Carter sat silently in the back seat of the luxury automobile and didn’t react to the crowd of reporters shouting for answers.

“Jay Z maybe will give an answer when the collection is launched at Barneys,” his companion said.

A few minutes later, Jay Z was seen exiting his car in a casual gray sweatshirt. He headed into Riche, one of Stockholm’s ritziest restaurants.

The former Marcy House resident is set to debut a limited-edition clothing line with Barneys Nov. 20 , with prices ranging from $70 for the cheapest item to $33,900 for a designer watch.

Fans, celebrities and even some of his childhood friends have called on the multimillionaire to break his deal with Barneys in the wake of racial profiling allegations.

Trayon Christian, 19, an African-American engineering student from Queens, came forward Tuesday to tell the Daily News he was handcuffed and held by undercover cops April 29 after buying a $349 Salvatore Ferragamo belt at Barneys.

He was accused of using a fraudulent credit card, but released without charges, his lawyer said.

Christian has filed a civil rights lawsuit against the store and the NYPD.

A second alleged victim, Kayla Phillips, 21, contacted The News on Wednesday to report a similar incident.

"Jay Z, he's a very busy man, but I know when he does get involved, he'll make the right choice. I don't think he should do any more business with Barneys," said Phillips on Friday.

"I'm pretty sure when he hears about it, or even when he gets involved with it, he knows that it's not right and he will make the right choice," she added.

She was detained Feb. 28 by undercover cops after buying a $2,500 Celine bag at the Barneys flagship Madison Ave. shop with her Bank of America debit card.

Phillips filed a complaint with the NYPD, and the incident is currently under investigation, cops said.

She has a $5 million notice of claim with the city of her intent to sue the NYPD, and a civil rights lawsuit that includes Barneys will follow, according to her lawyer.