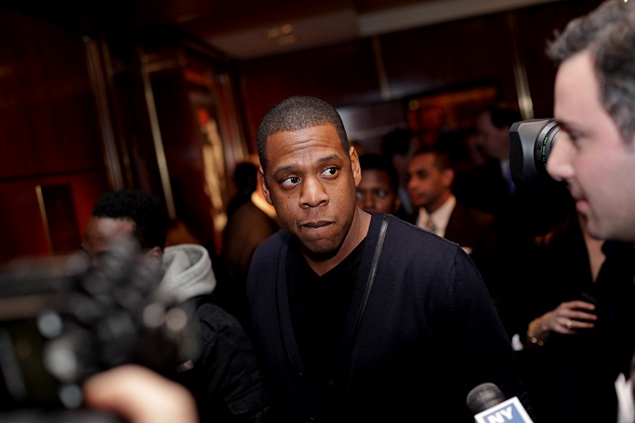 He’s got 99 problems and Barneys is a big one.

Jay Z is getting slammed online for his association with the high-end department store rocked this week by two separate instances in which black shoppers say they were profiled and mistakenly accused of theft.


The department store isn’t faring any better, with at least one online petition calling for a boycott.

The enterprising user behind the change.org petition is also selling “Barneys New Slaves” t-shirts with proceeds going to the Boys and Girls Club of America.
Even big names like Questlove, the drummer for The Roots, and Power 105 DJ Angela Yee are getting in on the criticism. The firestorm of controversy began Tuesday when Trayon Christian, 19, told the Daily News he had sued the city after two undercover NYPD detectives allegedly detained him after he purchased a pricey Ferragamo belt from the Barneys flagship store on Madison Ave.

Christian said he decided to buy the Ferragmo accessory because one of his favorite rappers, Juelz Santana, had sported the belt.

Then on Wednesday Kayla Phillips, 21, told a similar humiliating ordeal.

She said she bought a $2,500 designer bag from the store in February — but only made it a few blocks before four cops allegedly hassled her and demanded to see ID. She has filed a $5 million notice of claim with the city notifying them of her intention to sue.

So far, Jay Z has not commented on the controversy. The hip hop mogul has lent his name to a limited edition line of clothes and jewelry that will go on sale in the store Nov. 20.

Barneys has said in a statement no employee “was involved in the pursuit of any action with the individual other than the sale.”