James Harden, 50 Cent and Saweetie are at the center of some apparent drama.

The unlikely trio was trending on Twitter Friday after Harden shared a few cryptic messages to his Instagram story.

The first read, “I’m tired of people creating these false ass stories knowing I really don’t speak on bulls–t. Leave me out of all the weird s–t. S–t trash. Back to the my real life.”

Harden’s second story read, “People on here just making s–t up for the clout. I really stay out of the way. Cashapp 100K? Beat it.” 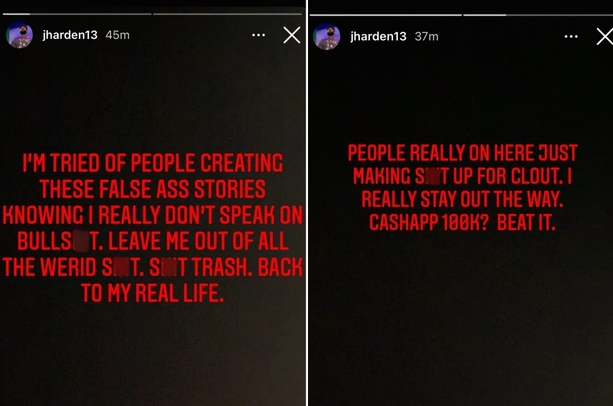 The Nets star, who has been sidelined due to a hamstring injury, was responding to a wild rumor that he sent $100,000 to rapper Saweetie’s CashApp account for a date.

Before that, Harden tweeted a blue baseball cap emoji, seemingly denying the bizarre rumor. “Cap” is slang for lie.

Saweetie, who publicly ignored the Harden dating buzz, is the ex-girlfriend of Migos rapper Quavo. The pair split in March after two years of dating.

Then, rapper 50 Cent, who is known to throw in his two cents about celebrity drama, did just that in a since-deleted Instagram post Friday.

“Wait, he a superstar, why the f–K is he paying a b-tch to go on a date,” the “Power” star shared, before tagging Saweetie’s ex in the post.

“See what you did @quavohuncho they don’t know what they like till they see somebody with it SMH LOL Help me understand this!,” 50 cent continued.

Harden, meanwhile, is working on returning to the Nets’ lineup after injuring his hamstring just minutes into Game 1 of their second-round series against the Bucks.

Nets coach Steve Nash said Harden is “progressing in the right direction,” but still has a ways to go before he can make his postseason return.

The Nets-Bucks series is tied 2-2, with Game 5 scheduled for Tuesday in Brooklyn.