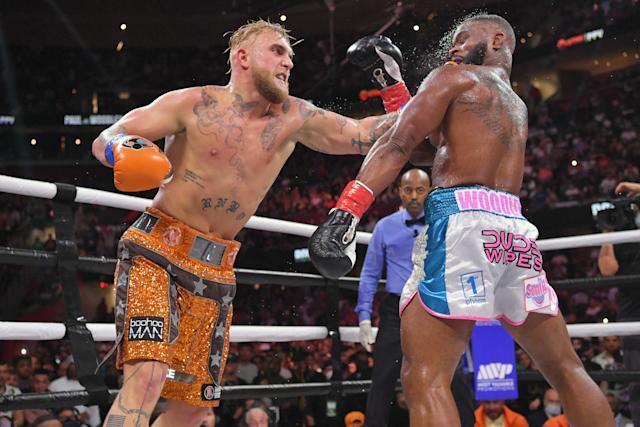 Jake Paul just beat future UFC Hall of Famer Tyron Woodley in a split decision victory and then the fighters seemingly agreed to a rematch in the ring. 24-year-old Paul fought a good fight and was the more active fighter over the 8 rounds. Woodley had his share of positive moments stunning Paul near the middle of the 4th round.

After the fight, during the post-fight interview which went down in front of a packed house at Rocket Mortgage FieldHouse in Cleveland (Jake's hometown) the guys came face-to-face and seemed to agree to a rematch.

The condition if Woodley got the "I Love Jake Paul" tattoo done.

The action wasn't just in the ring stars like Dave Chappelle, Dustin Poirier, Andre Berto, and a bunch of Olympians from Ohio were in the building.

Chappelle was REALLY into the fight jumping up-and-down behind the ring for nearly the entire scrap.

Paul said Woodley put up a better fight than he expected but called the split decision "bulls**t.

And, Jake won in more way than one sharing a post-fight kiss with GF Julia Rose.

As for the rest of the card Tyson Fury's bro, Tommy Fury won a 4-round unanimous decision victory over Anthony Taylor. After getting his 1st dub on American soil, Tommy called out Jake challenging him to a fight.