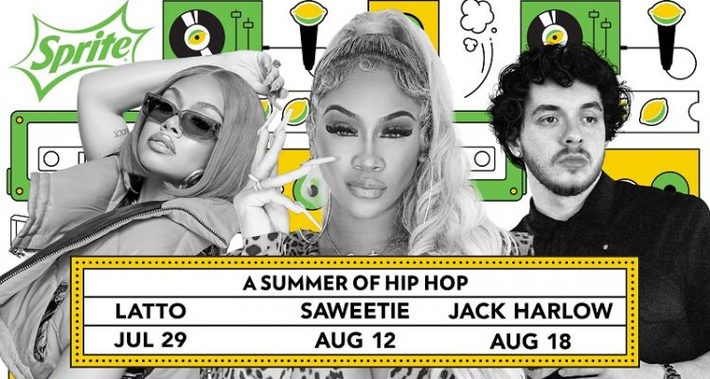 It is no surprise that Jack Harlow is one of Hip-Hop’s brightest young stars. The Kentucky native rose to prominence in 2020 with his JetsonMade produced, hit single, “What’s Poppin.” The track was arguably the song of the Summer in 20202, which led to the release of his gold-certified debut album, Thats What They All Say. The album featured Lil Baby, Chris Brown Adam Levine, a posthumous Static Major and more.

The 23-year-old rapper is gearing up to hit the road for his now sold-out “Creme De La Creme Tour” this Fall. The tour is set to begin in Orlando on September 8th.

Before the road festivities begin, he is teaming up with Sprite for their latest, Live From The Label (LFTL) Concert Series. When Sprite reached out, we jumped at the opportunity,” said the “Route 66” rapper. “The brand has a history of cool. I associate them in a positive and fly light, so I look forward to building with them.

The LFTL Concert Series kicks off on July 29th with ATL rapper Latto, followed by Saweetie on August 12th. Jack Harlow will close out to series on August 18th for the grand finale.

“I love the confidence they (Latto and Saweetie) project,” he says in admiration of his fellow headliners. “They are extremely talented and I love seeing women succeed in our art form (of music). It’s a beautiful thing.

The LFTL campaign will also shed light on upcoming artists. Jack Harlow will be joined by Ryan Trey. Harlow cites Bryson Tiller as the source for his discovery of Ryan’s music

“I’ve been familiar with him for a while, so I think it’s a dope opportunity to show my taste in music,” said Jack. “He has a great voice and ear for beats so I’m excited to see as he continues his career.”

Latto and Saweetie will be joined by ChloTheGod and Summer Valentine respectively.

All three LFTL headliners will perform at the venue where their first-ever performance took place. For Jack Harlow, he’s taking it back to ATL.