GUN TOTIN' GRANNY SHOOTS A BURGLAR TRYING TO BREAK INTO HER HOUSE! 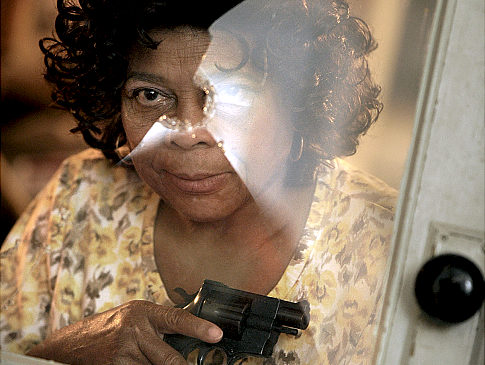 A gun-totin' granny in Alabama shot an would-be intruder during a late-night robbery attempt on Monday.
Ethel Jones, a 69-year-old widow, was in the bathroom when she heard someone outside her home in Decatur, Alabama around 3 a.m.

"I heard somebody at the back door and then around at the front door," Jones told the Decatur Daily. "I said to myself, 'Somebody's fixin' to break in.' "

The mother of four generally keeps a .38 snubnosed revolver under her pillow, and carries it around when she is home alone at night.

The intruder removed a window air conditioner and started to make his way into the house, Jones told the newspaper. When they saw one another, she fired.

"I shot three times," Jones said, "and he ran away hollering."

The suspect, 18-year-old Michael Bynum, who lives less than a mile away from Jones, travelled to the hospital where police later apprehended him. He suffered a gunshot wound to the gut. He will be charged with second-degree burglary, police said.

"I hope this will make people have second thoughts before they break into a home in our neighborhood," Jones said.