FREAKS OF THE WEEK! CHICK RODE HER BOYFRIEND ON THE BACK OF THE BUS! 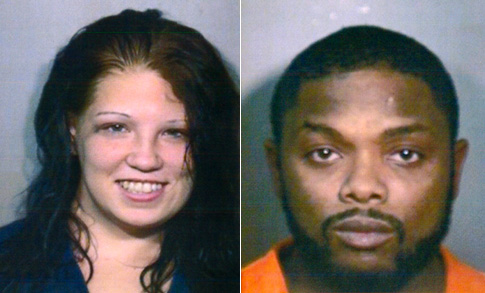 A raunchy Pennsylvania woman was arrested for giving her inmate boyfriend a bus token of her affection during a mass transit tryst.

Amanda Confer, 24, was caught on a security video having sex with her significant other while riding on a city bus in Montoursville, Pa., according to a police report unearthed by TheSmokingGun.com.

The woman turned her infant daughter over to another inmate while she gave Randell Peterson, 32, the ride of his life in the back of the bus on Aug. 26, said the police report filed earlier this month.

Peterson and jail pal Joshua Schill were riding the bus as part of a work-release program that allows inmates to leave the county jail at specific times.

Peterson alerted girlfriend Confer to his schedule, and the pair were soon sitting together in the last row of seats. The couple began hugging and kissing before things turned hot and heavy, police said.

Confer initially performed oral sex on Peterson before sitting on his lap as the camera recorded everything and Schill watched the little girl from a row away.

The pair, due back in court on Nov. 4, were charged this month with conspiracy, indecent exposure, open lewdness, and disorderly conduct.


You gotta feel sorry for them! He's a inmate for god's sake!