FIND OUT WHO'S GETTING A GRAMMY! SOME DESERVE IT & SOME DONT! 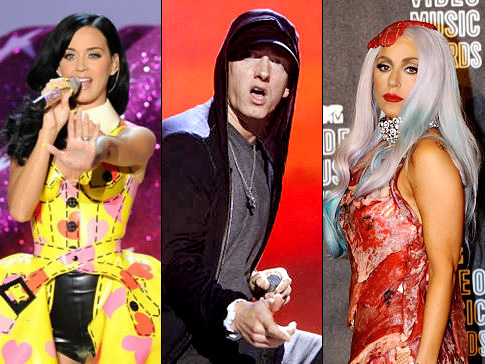 When the Grammy nominations are announced Wednesday night, you can bet the rent on who'll get the most mentions — and bag the top awards.
That would be Mr. Slim Shady himself: Eminem.

The rapper has 2010's best-selling CD, which doubles as the year's most critically revered. He even titled it "Recovery," in case you miss its Grammy-ready sense of drama.

Eminem's disk will certainly turn up in the Album of the Year category, plus possibly twice in the top Song and Record slots (for "Not Afraid" or "Love It When You Lie"). Also look for him in every rap category that doesn't specifically exclude him by gender.

While the Detroit wordsmith has already bagged no less than 10 Grammys, all involved rap. Wins in the headiest categories would be a rare moment for both him and hip hop, which has rarely made it into that fine company.

The most likely winner of the fourth-biggest Grammy (Best New Artist) also stresses the spoken word: Drake. Interestingly, only a change in the rules this year made the first major Jewish Canadian rapper eligible for this prize. Previously, you couldn't qualify as "new" if you'd been nominated in any category before. (Drake had several noms for collaborations preceding his own CD).

While Drake serves as front-runner in the fresh-face category, several other acts stand as likely alternatives. Here's a look at them, along with the probable names in Grammy's three other top slots.

-Drake: He's the best-reviewed and most popular new rapper of the year. And, oh yeah, he's a hottie.
-Bruno Mars: His sunny collaborations burned up the airwaves this past summer.
-Florence and the Machine: The iron-lunged vocals of front woman Florence Welch killed at September's MTV Video Music Awards, sending the group's debut shooting up the charts.
-Mumford and Sons: This Brit-folk outfit, which contains no actual family members, serves as the year's token critic's choice.
-Kid Cudi: A Kanye protégé, Cudi put out a hip-hop CD so arty it didn't even contain much rap.

ALBUM OF THE YEAR

-Eminem, "Recovery": See above.
-Sade, "Soldier of Love": Who else could disappear for years at a time, do almost no promotion on a new CD, put out exactly the same kind of music she has for 25 years, and still sell over 1.5 million albums? Only the ultimate smooth operator.
-Drake, "Thank Me Later": The newbie to beat.
-Arcade Fire, "Suburbs": This year's token "serious rock CD."
-Carole King and James Taylor, "Live at the Troubadour": The King/Taylor tour became one of the year's biggest, and most warming, events, winning hearts by pushing the idea of friendship as a more enduring bond than romantic love.
-Susan Boyle, "I Dreamed a Dream": For sales, and dramatic back story, if not actual talent.
-Alicia Keys, "The Element of Freedom": Hardly her most crucial CD, but Grammy voters always find a place for their pet.
-Jay-Z, "The Blueprint 3": A perennial Grammy fave, Jay proved his third "Blueprint" is the charm.

SONG OR RECORD OF THE YEAR

-Eminem, "Not Afraid": See above.
-Eminem with Rihanna, "Love the Way You Lie": Ditto.
-Lady Antebellum, "Need You Now": One of the prettiest melodies to appear on a song you can't avoid.
-Katy Perry, "California Girls": A token sop to the kids.
-B.o.B featuring Hayley Williams, "Airplanes": The catchiest, and biggest, rap-pop collaboration of the year.
-Lady Gaga featuring Beyoncé, "Telephone": Who could resist such a starry tete-a-tete?
-Jay Z and Alicia Keys, "Empire State of Mind": The modern song that most sounds like a standard.