Eminem Talks About Almost Having A Drug Overdose 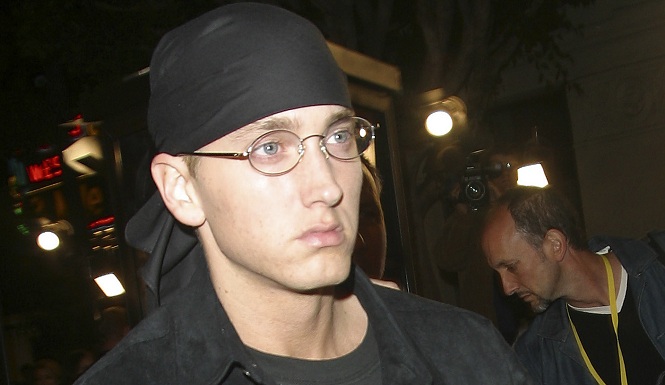 "My name is Marshall. I'm an addict," says superstar rapper Eminem in a scene from the Matthew Cooke documentary How to Make Money Selling Drugs.

Eminem has been pretty open about the fact he was once addicted to prescription meds, including Vicodin and Xanax, addressing his drug problems on his 2009 album Relapse and 2010’s Recovery. But in How to Make Money Selling Drugs, he talks about how severe his addiction was and how he nearly died.

Like most addicts, Eminem started as a casual user, then as his problem deepened, he was in denial about how severely impaired he had become. "When I took my first Vicodin, it was like this feeling of, 'Ahh.' Like everything was not only mellow, but [I] didn't feel any pain," Eminem says in the film. "I don't know at what point exactly it started to be a problem. I just remember liking it more and more. People tried to tell me that I had a problem. I would say, 'Get that f****ing person outta here. I can't believe they said that s*** to me. I'm not out there shooting heroin. I'm not f***ing out there putting coke up my nose. I'm not smoking crack."

During the documentary, Eminem tells Cooke that he started mixing pills, including Xanax and Valium. His problem peaked when he mixed too many medications and overdosed; he was rushed to the hospital just in time for doctors to save his life. "Had I got to the hospital about two hours later, I would have died," he says. "My organs were shutting down. My liver, kidneys, everything. They were gonna have to put me on dialysis. They didn't think I was gonna make it. My bottom was gonna be death."

A month after Eminem came out of the hospital he relapsed, reports MTV News. The only thing that stopped him from downward-spiraling into oblivion was his determination to be a responsible father to his biological daughter Hailie Jade Scott, and two adopted daughters, Alaina ("Lainie") and Whitney. "I'm looking at my kids and [realizing], 'I need to be here for this,'" he says in the film.

Instead of checking into a high-profile rehab clinic, Eminem quit drugs on his own through a rigorous detox program that left him literally incapacitated. "Coming off everything, I was 24 hours a day for three weeks straight," he says. "And I mean, not sleeping, not even nodding off for a f***ing minute. I had to regain motor skills; I had to regain talking skills. It's been a learning process; I'm growing. I couldn't believe that anybody could be naturally happy without being on something. So I would say to anybody, 'It does get better.'"

In addition to the confessional interview with the rapper, the movie addresses the nation's war on drugs and the government's outrageous costly drug programs, the effectiveness of which are the subject of intense debate. Throughout the film, Cooke interviews dangerous drug dealers, as well as activist celebrities like Russell Simmons and Woody Harrelson, ex-cops, and the victims of allegedly wrongful drug-related arrests.

How to Make Money Selling Drugs opens June 28 in Los Angeles. Eminem is rumored to release a new album before the end of this year.