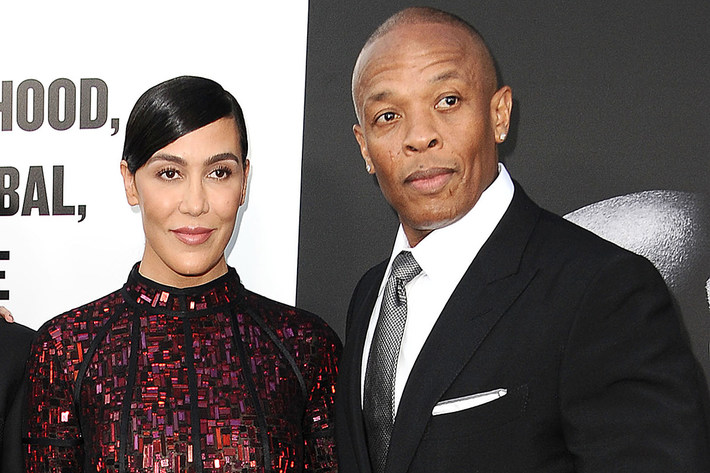 What’s in a name? Plenty if you’re a famous rap mogul.

Dr. Dre’s estranged wife, Nicole Young, is suing the Beats impresario in California court, claiming that she co-owns the trademark to his name — as well as his landmark album, “The Chronic.” She further alleges in court papers that Dre “secretly” transferred the valuable trademarks to a holding company after, she claims, he kicked her out of their home earlier this year.

Young’s being repped in the case by LA power attorney Bryan J. Freedman, whose clients have included Gabrielle Union and Megyn Kelly in their disputes with NBC. In court documents, Nicole’s team alleges that Dre was “caught secretly transferring valuable trademarks he owned with his wife … to a newly created asset holding company that he created and controlled after he expelled his wife from their home, and before he threatened to file divorce.”

The papers, exclusively obtained by Page Six, allege that “Two days after the threat, Nicole had no choice and initiated divorce proceedings. Andre’s transparent and reprehensible scheme to transfer these assets away, without Nicole’s knowledge or consent, so he could retain more for himself in a divorce from his wife of 24 years, and the mother of his three children, is an epic failure and reveals the true nature of his character, or lack thereof.”

Page Six previously reported that Dre (born Andre Young) and Nicole are battling over a prenup, and that Nicole has asked for $2 million per month in spousal support after outlining the couple’s lavish lifestyle in court docs.

She now alleges in the latest suit: “After Andre forced Nicole out of their family home on or about April 2, 2020, he quickly plotted to secretly transfer their assets, to deny Nicole her equal share.” And that “These valuable Trademarks were filed during Andre’s years married to Nicole, which coincided with Andre’s years of rising success in the music industry. The Trademarks are presumed to be community property pursuant to California Family Code Section 760. Because they were married, Nicole and Andre owned the Trademarks jointly, from the date of their first filing in 1997, and through 2013, by virtue of being community property owners.”

The filing alleges that “Andre now purports to own the Trademarks in full.”

Nicole’s team wants the trademarks to be put in a trust, and she’s suing for damages and legal fees. She previously also asked a court for $5 million in legal fees to fight her divorce case — indicating it will be an epically costly case.

Meantime, Dre’s lawyers have previously alleged that Young has refused to turn over his belongings from the Malibu home where she’s staying — including his golf clubs, a motorcycle, and a registered handgun. She’s fired back in court papers that with his near $1 billion worth, he can afford replacements.