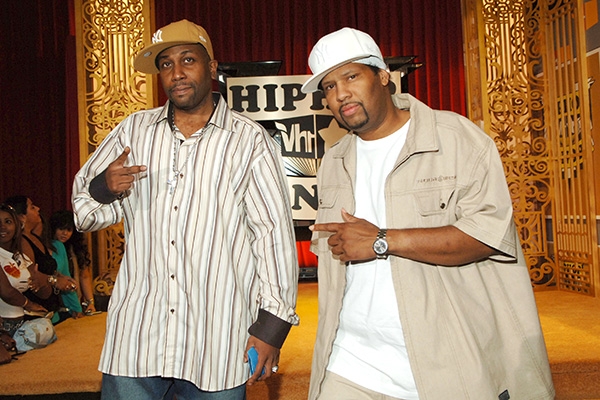 Rodney Bryce, who made his mark on hip-hop under the name DJ E-Z Rock, died Sunday, a spokesperson for Bryce's friend and collaborator Rob Base confirmed to Rolling Stone. The cause of death has yet to be revealed.

Rob Base and DJ E-Z Rock released their first single, "DJ Interview" in 1986, but the 46-year-old Bryce cemented himself into the hip-hop canon with 1988's iconic track "It Takes Two." Produced by Teddy Riley and built around a vocal sample from Lyn Collins' 1972 hit "Think (About It)," the song blended hip-hop with house music and helped lift rap into the pop consciousness, becoming many people's first exposure to the genre. The track would later be sampled by Snoop Dogg, Gang Starr, Girl Talk and South Korean girl group 2NE1, among many others, and has long become a pop culture staple, appearing in everything from the soundtrack to the 2004 video game Grand Theft Auto: San Andreas to a scene in Sandra Bullock's 2009 romantic comedy The Proposal.

Questlove included the track on his Top 50 Hip Hop Songs of All Time for Rolling Stone, singling out James Brown drummer John "Jabo" Starks' work for the Brown-produced "Think." "Jabo's sparse, all-on-the-one funk was more at home with conservative soul lovers, which is why it makes total sense that... Jabo was the anchor of the New Jack Swing movement," wrote the Roots drummer. "Jabo's go-to magnum opus was on the five-break-filled JB-produced 'Think (About It)' by Lyn Collins. James' holy ghost yelp almost threatens to upstage Starks' show, but it's Starks' steady glide that gave R&B music its blueprint some 15 years after its release."

The duo released two other singles from their debut album —"Joy and Pain" and "Get on the Dance Floor"—but "It Takes Two" would be the standout single off the group's debut album of the same name. The album was certified platinum in 1989 and reached Number 31 on the Billboard 200, an impressive feat for a hip-hop album at the time.

Bryce would not appear on Rob Base's 1989 follow-up The Incredible Base, but reunited with the rapper for 1994's Break of Dawn.

Rob Base and E-Z Rock both grew up in Harlem, becoming friends in the fifth grade. "Back then, there were other groups and we used to see other people perform," E-Z Rock told Pennsylvania newspaper The Morning Call in 1991. I bought a set of turntables and he bought a mic."

As E-Z Rock recalled, the duo sent "It Takes Two" to hip-hop label Profile Records and received a call from the label the next day. "At first, it was kind of weird because we only had one record," Rock said of the group's first hit "Make It Hot." "We would open up for people and get on for 15 minutes doing that one song. Then, when 'It Takes Two' came out, we started headlining."

Speaking to The Boombox in 2011, Base was asked about the group's pop- and R&B-influenced sound. "Well, I know definitely I was one of the first artists to do the hip-hop and R&B thing," said Base. "When we did it, I just wanted to do something different. I didn’t want to do the same thing that the other groups were doing at the time. So we just did it that way and I really didn’t care what people said. There were a few groups that were saying, 'Oh, you’re selling out. You’re this, you’re that.' And I look at them now and they can’t even get one show."

Various hip-hop artists paid condolences to the DJ on social media. DJ Scratch posted a late-Eighties picture of the duo on his Instagram, while Biz Markie tweeted "R.I.P. to EZ Rock from Rob Base and EZ Rock. You will truly be missed." Base himself posted a picture on his Instagram with a picture of Bryce and the message "R.I.Power DJ EZ Rock. Team Fearless Salute."