DAMN! SHE HAD US ALL FOOLED! 16 YEAR OLD CYAN BROWN CLAIMED SELF DEFENSE WHEN SHE STABBED A MAN BUT SHE'S NO VICTIM AFTER ALL! 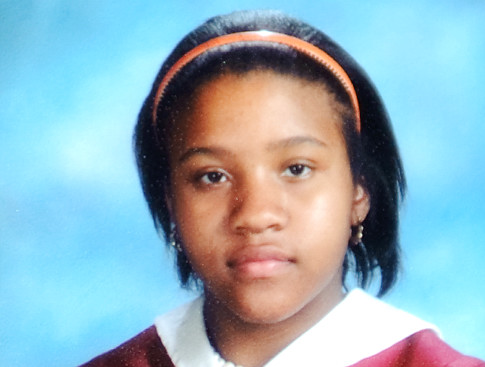 She's no victim, after all.
A Queens teenager who stabbed a man to death in a subway was facing manslaughter charges Tuesday night after cops said she was to blame in the Christmas Eve fracas.

Cyan Brown, 16, was originally portrayed as a plucky victim who stabbed Thomas Winston, 29, in self-defense after a group of men tried to attack her.

"She was the main aggressor, without a doubt," a police source told The Daily News.

Brown got into a shouting match with Winston after one of her male friends bumped into him on an F train at the 21st St.-Queensbridge station.

Winston, who was with a group of pals, asked the man to apologize, setting off a confrontation that apparently spilled on to the sidewalk in front of a chicken joint.

"You could say excuse me," the slain man said, according to cops.

That's when Brown, who lives in the nearby Queensbridge Houses, got involved in the battle of words.

"She takes over, gets mouthy," the source said.

"She reaches in her bag, takes out a weapon, lunges at him and cuts him," the source said.

Winston's friends chased after Brown and tried to drag her off the F train - but she escaped.

Witnesses told cops it appeared the teen was fleeing from a gang of aggressive men.

Brown's mom later told reporters her daughter was protecting herself from the men who tried to fondle her when she stabbed Winston.

Cops also bought the self-defense claim up to a point but after further investigation, they poked holes in that account of the stabbing.

Brown turned herself in for questioning Tuesday afternoon at the 114th Precinct. She is expected to be arraigned today on manslaughter and weapons charges.

"We located an eyewitness to the stabbing," Deputy Police Commissioner Paul Browne said, adding that the witness picked Brown out of a lineup. "As a result, she has been arrested."

Winston was the father of a baby girl.

He was living in a homeless shelter and he was trying to turn his life around, his family said.

Relatives portrayed him as a peaceful person who never should have been killed on his way to get a subway train.

"When you stab somebody in the heart it should be murder first-degree," said his aunt, Diane Greenspan.

"I hope justice will be served."