DAMN! EVEN THE DIRECTOR CRACKS FAT JOKES ON PRECIOUS! 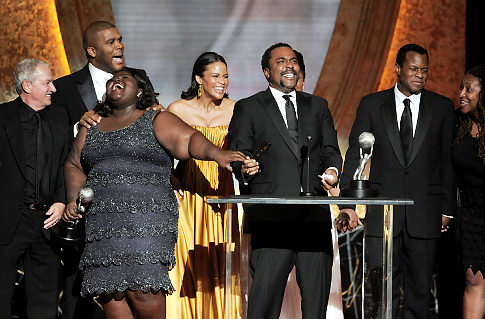 Fat chance people will forget THIS one!

"Precious" director Lee Daniels made a big blunder this weekend when accepting Best Film honors at the NAACP awards ceremony in Los Angeles, and it didn't go unnoticed by the crowd - or the star, Gabourey Sidibe.

"No one in Hollywood told me they wanted to see a movie about a 350-pound black girl who had HIV," Daniels blurted out during his acceptance speech, before realizing that he'd possibly embarrassed his full-figured star. Trying to cover up his mistake, the director stuttered at Sidibe and the audience, "She's not 350 pounds. ... Gabby... But the book says. ... "

The Oscar-nominated actress grew noticeably upset, shaking her head at the director's comment, but it isn't the first time the 26-year-old has had to endure a stinging blow because of her weight. "Gabby was excited Vanity Fair included her in their young Hollywood March issue, but felt not being included on the cover was a snub and it was due to the way she looks," says an insider. "After all, she's up for an Oscar —how many of the nine thin actresses who were on the cover can say the same?"

But Brooklyn-born Sidibe — who picked up her own NAACP award for best leading role in a movie — has found a graceful way to take each slight in stride. "Daniels kept apologizing in front of the crowd, and even though Gabby was upset by his comment, she still accepted his apology. She was like, 'Okay. I wanted that in there. Thank you,' " says a source. "It's not like this was the first time someone has made a hurtful remark about her weight, even unintentionally."

And as for not being able to add the title of Vanity Fair cover girl to her résumé, Miz Sidibe doesn't seem to be holding a grudge about that one, either. At the USA and Vanity Fair "Character Approved" Award party held at the IAC building in New York City on Thursday, the actress was a last-minute surprise on the red carpet. "She wasn't expected at the magazine's event, but dropped in to say hi to Maggie [Gyllenhaal]," says a spy. "The two were giggling and whispering like best friends, and Gabby seemed like a veteran when it came to fitting in with the Hollywood crowd."

Indeed, Sidibe seems like she's becoming a pro at being in the limelight: "She was wearing a casual top and jeans, and was walking the red carpet like she was in a full gown," says one seasoned photographer at the fete. "I've never seen her more confident and glowing."